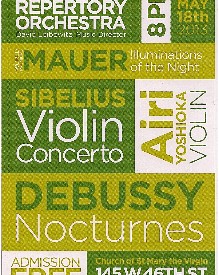 Under the expert and poetic leadership of conductor David Leibowitz, the New York Repertory Orchestra presented a challenging and satisfying program to a near capacity crowd at The Church of St. Mary the Virgin, W. 46th St., NYC on Saturday evening, May 18. 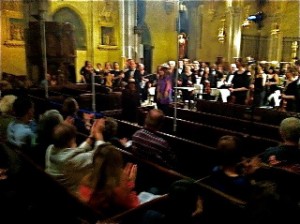 The program opened boldly with the world premiere of Peri Mauer’s Illuminations of the Night, a work drawing its inspiration from observations by the composer of changes in the city as she often worked through the night composing. Not surprisingly, this  Manhattan cityscape even alludes to such familiar urban night sounds as garbage trucks and passing sirens, as well as serene and suspended interludes of relative quiet. The orchestration was expert, and the formal structure of the piece 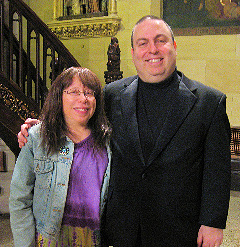 clearly defined. Beginning dramatically with aggressive brass and percussion, such challenging statements gave way to a beautifully transparent interlude before the city seemed once again to awaken in all its vitality. A less reverberant acoustic would undoubtedly reveal much detail that was unavoidably blurred at this hearing. But, the commitment of the players and the enthusiastic reception by the listeners should fully justify conductor Leibowitz’s decision to include something totally new as grist of the mill for a “repertory orchestra”.

Debussy’s Three Nocturnes followed, and here one might suggest that the reverberant acoustic of the church was actually an asset, most especially in the lovely sheen placed around the female voices in the final movement, Sirénes. Beautifully balanced woodwind playing, precise in its intonation gave Nuages its stately shifts of color and ambiguous phrase shapes. I particularly admired Leibowitz’s tempi throughout, never bending to rubato merely to make a momentary effect. Fétes with its distantly approaching brass fanfares, danced appropriately without feeling hectic. And the shifting reiterations of the sirens’ song seemed to linger in the air even after the final notes.

Following intermission, soloist Airi Yoshioka presented an accomplished reading of the great Violin Concerto in D minor, Op. 47 of Jean Sibelius. As surely as in his symphonies, Sibelius here seems to unfold some sort of secret saga, colored with the colors of his native Finland. Ms. Yoshioka’s mastery of the technical difficulties of this challenging work were clearly evident, though precise synchronization between orchestra and soloist proved at times elusive, due undoubtedly to the difficulty once again of the acoustic situation. By and large, the orchestra coped beautifully with the demands of the score, considerably more symphonic that is usual in concerto accompaniments. Particularly affecting was the deeply felt climax of the slow movement, where soloist and orchestra seemed at their most committed. And the Polonaise-like finale sparkled with energy bringing the concert to a satisfying and brilliant conclusion, rewarded generously by the grateful audience.

Andrew Rudin is a composer whose electronic music, most notably “Tragoedia” on Nonesuch Records, and a screen credit in the film “Fellini; Satyricon” brought him early recognition. In recent years concerto for Violin, Piano, and Viola have appeared on recordings with Innova and Centaur labels. His piano sonata was recently premiered in NYC by pianist Beth Levin.

The Winners of the Ibla Grand Prize International Music Competition – Weill Recital Hall at Carnegie Hall, May 2, 2013 – »
« Giorgio de Chirico and the Nostalgia of Infinity