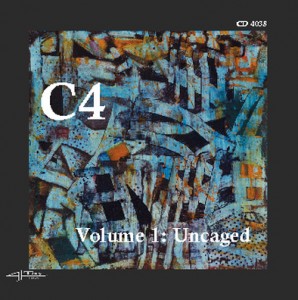 I caught the second half of the C4 and the Canite Quartet program, new music for Chorus with String Quartet at Issue Project Room in Brooklyn, Sat., March 8, 2014.  Half of the pieces were by C4 member chorister-conductor composers, and the other half by other composers. Pieces included works by Martha Sullivan, Mario Gullo, David Harris, Michael Conley, Veronika Krausas, and Tarik O’Regan. This is one of the best choruses in the country; as composers, they are among the most multitalented….Canite consists of Elizabeth Derham, violin; Alex Shiozaki, violin; Isabel Hagen, viola, and Sofia Nowik, cello, and they have fine tone and a tight ensemble.  (Ms. Derham is a choral singer-composer in C4.)  The C4 programs are invariably worthwhile; and they usually have a really nice reception afterwards, as well. Their website is at http://www.c4ensemble.org/.

Congregation Ansche Hesed hosted Nina Beilina’s ensemble, Bachanalia, Sunday, March 23, 2014 at 3pm (100 St. near Broadway) in New York, NY, to a good house.  The program was called Jewish voices and featured J.S. Bach, Concerto for Two Violins in D minor (Alex Abayev, Mikhael Kuchuk, violins; Gerald Ranck, harpsichord); Steve Cohen (b. 1954) (of New York), Three Psalms Settings for Cantor Natasha J. Hirschorn, soprano, and the Shirei Chesed Community Chorus (with Arman Alpyspaev, viola); Dmitry Shotasakovich, Chamber Symphony in C minor, Op. 110a; and, George Gershwin, selections from Porgy and Bess (Nina Beilina, violin).  Ms. Beilina, who was concertmaster and soloist for major orchestras in Russia, remains one of the world’s foremost classical violinists. Composer Steve Cohen of NY (who is not to be confused with Steven D. Cohen of NJ) wrote some wonderful settings for the psalms, employing the soloist, the soloist accompanied by the chorus at times, and the chorus. The soloist, Cantor Natasha Hirschorn, soprano, has a lovely voice and virtuosic technique. I have been spending Saturdays at Ansche Hesed, a very welcoming conservative congregation, and was very pleased with the music! More about them at http://www.bachanalia.org/nina_beilina.html.

I saw German-born jazz violinist Gregor Huebner perform a Latin program, El Violin Latino, at Hudson View Gardens (128 Pinehurst Av. near 185 St.) in New York, Sunday, March 25, 2014 at 5 pm, as part of the HVG series, which has an excellent reception afterward, all for a nominal suggested donation. Star drummer Jerome Goldschmidt and an excellent bassist joined him at this program. Mr. Huebner is a fantastically talented artist, who is preparing to record a second CD of Latin music, when he has enough financing for it.

Spectrum Symphony of New York, founded by its conductor, David A. Grunberg in 2002, is one of the better small professional (pickup) orchestras in the United States.  Its recent programs have been held in the richly resonant acoustics and comfort of the Church of St. Joseph (571 Avenue of the Americas, near Waverly Street exit of the West 4th Street subway station) in New York, NY.  Each of these concerts has a piece by a living American composer and revisits classical favorites and neglected masterpieces as well. On March 24, 2014, the program opened with a short piece by American composer Philip Wharton (b. 1969), There Was a Star Danced (2006, revised 2014; around 4 1/2 minutes, performed twice).  This was explosive fun, spiritually akin to Prokofiev – neo-romantic and charming – with modern layering and transparent orchestration.  The piece is modeled on a “swirling nebula” that explodes at the end; and, it was written for younger players. This orchestra, with its most competent concertmaster and core performers, performed it with most professional panache.  The balance of the program were two old favorites:  Sergei Prokofiev, Piano Concerto No. 3 in C major, Op. 6, with Makiko Hirata as piano soloist.  This piece has a lovely, transparent orchestration of sound with a focused, forward-flowing, effervescent and delicious piano of sublime virtuosity – it’s one of the best musical gems of the 20th Century and one of the most enchanting. Ms. Hirata gave a superb performance and the orchestra, led by David Grunberg, sounded heavenly. This was followed by Johannes Brahams, Symphony No. 1 in C minor, Op. 68 (1855-76), which is considered standard repertoire. The conductor elected to perform it at a slightly slower tempo due to the extraordinarily resonant acoustics of this church – one of the best venues in the City – and the result was brilliant – lovely, passionate, and rousing.  I loved this evening! Visit Spectrum at http://spectrumsymphony.org/.

Roulette in Brooklyn, NY, hosted pianist Eric Huebner and violist Max Mandel in a concert curated by composer Michael Vincent Waller, March 25, 2014. The program opened with pieces by Waller, Gavin Bryars and Caroline Malonee, from 1993 onwards.  Then, the duo showcased four new premieres before ending with Morton Feldman’s classic, The Viola in My Life III (1970). Annie Gosfield, Tenacious Friction and Swerving Conviction (2014) is short and juicy. Waller, La Riva Sud (2014) (the South Bank) is lovely and lyrical – the viola sings as the piano dances. Elizabeth Hoffman, musical boxes (2013), by the NYU professor of music, is an admixture of the earthy and the ethereal, with a full panoply of sounds; it is a most fascinating piece.  Yotam Haber, The Book of Maintenance and Sustenance (2014) is a clairvoyant piece – neobaroque in part – one instrument mirroring the other – delicate and robust.  The Feldman piece is a classic – slow tableau, ruminative – yet relatively short.  This was a delightful evening! They’re at http://roulette.org/.

It’s hard to do an opera production justice in a short paragraph or two. The Center for Contemporary Opera (CCO) presented a work-in-progress, Big Jim and the Small Time Investors, by Eric Salzman, with a libretto adapted by him from a work by Ned Jackson, March 11, 2014 at the Faison Firehouse Theater (124th St. in Harlem) in New York, NY.  Steven Crawford conducted; Andrew Eggert stage directed; Jessica Thompson, stage managed; Peter Fancovic performed at the piano; William Schimmel, the accordion; and, Paula Kimper, the synthesizer.  The cast consisted of Vale RIdeout (as Big Jim), Aaron Theno, Codette Boudreaux, Daryn Zimmer, William Browning, Blake Burroughs, Jennifer Fair, Jami Leonard, Leandra Ramm, Gregory M. Spock, Jessica Thompson, and Matthew Yohn. Loosely based on Wall Street fraud and speculation theme – but more surreal – the opera is a lot of fun. And, everything was highly professional about this production although it was in an early stage of development as a chamber opera. Each and every singer gave a first-class performance. Eric Salzman, composer and the last composer to be staff critic for the New York Times, wrote a piece updating the Italian madrigal for the 21st century.  This piece has music that is delightfully lyrical and supports the human voice marvelously well. CCO is online at http://www.centerforcontemporaryopera.org/.

Petr Kotik, conductor and composer, hosted a two-day festival in honor of composer-pianist Christian Wolff at 80, at Roulettte, March 26, 2014, and at the Czech Center Bohemian National Hall (W. 73rd St. near 1st Av.), March 27, with the S.E.M. Ensenble, Ostravska banda, OB Trio, String Noise & guests, including a free concert and a birthday party gala (including Philip Glass). I attended the Thursday eve, featuring pieces by Bernhard Lang, Alex Mincek, Christian Wolff, and Petr Kotik; Philip Glass, John Gibson, and Frederic Rzewski. Pianists included Wolff, Glass, Joseph Kubera and Dan Vanderwalle; and, there were musicians from all over the world in attendance. Much of the music was modern and contemplative – the programming was excellent and the performances  superlative! Much more about Christian Wolff at http://en.wikipedia.org/wiki/Christian_Wolff_%28composer%29.