Comments Off on More Spring 2014 NYC Concert Reviews and Notes 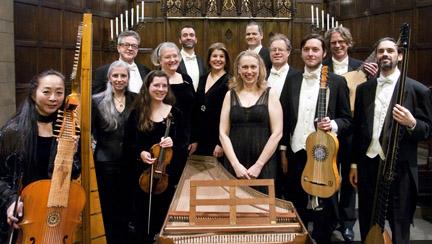 Baroque music – it’s not only a window to the past, but it’s a vital force in music today.  Think J.S. Bach, Antonio Vivaldi, Claudio Monteverdi, Salomone Rossi, and Barbara Strozzi – their writing in counterpoint and harmony survives the centuries and thrives, on its own merits and as sources of inspiration and craft.  Arrtek, the Baroque ensemble led by conductor/organist (Dr.) Gwendolyn Toth, held a concert on the GEMS series at St. Ignatius of Antioch Church (W. 87th St. near Broadway), Friday, March 28, 2014, called Monteverdi to Mielczewski, The Missing Link, which was wonderful – thoughtful programming, starting with the Sonata sopra Sancta Maria from Claudio Monteverdi’s (1567-1643) renowned masterpiece, the Vespers of 1610, several brilliant and relatively unknown masterpieces of Johann Rosenmuller (1619-84), and works of other meritorious composers – Samuel Scheidt (1587-1654), Samuel Capricornus (1628-65), Tarquinio Merula (c.1594-1665), Giovanni Rovetta (c. 1596-1668), Johann Schmelzer (c. 1623-1680), and Marcin Mielczewski (c. 1600-51) – excellent musicianship. New York’s Artek was joined by Frances’ Les Saqueboutiers de Toulose (cornettos and sacbuts, period brass instruments) and the superb Italian Baroque violinist, Enrico Gatti – and, gorgeous sound.  Artek featured the vocal talents of Laura Heimes, Sarah, Chalfy, Barbara Hollingshead, Ryland Angel, Philip Anderson, Michael Brown, Charles Weaver, and Peter Becker, experienced singers who are at the top of their craft; and, instrumentalists Charles Weaver and Daniel Swenberg (theorbo), Vita Wallace (violin), Theresa Salomon (viola), Motomi Igarashi (violine), and Dongsok Shin and Gwendolyn Toth (organ), who are excellent.  (The organ and the theorbo acted as a continuo.) The program featured a lecture by Dr. Sara Ruhle Kyle beforehand.  I missed several contemporary performances to hear this unique, lovely and invigorating concert. It was a treat! Artek is online at http://www.artekearlymusic.org/.

Svetlana Smolina, piano, and Bela Horvath, violin, gave a recital at the Lucy Moses School at the Kaufman Center in New York (next to Merkin Hall on W. 67th Street), Sunday, March 30, 2014 at 7pm, called the Greatest Romantic Masters:  Cesar Franck, Sonata in A Major for Violin and Piano, and Johannes Brahms, Violin Sonata No. 3 in D minor. Mr. Horvath has complete control over his vibrato, and he knows how to turn it on for excitement. Ms. Smolina has excellent technique – makes astute artistic choices playing with a very relaxed and stable arm – and she’s a stunning showperson, dressing in an elegant gown like Marlene Dietrich’s. The pair work very well together and make beautiful music.

Composers Concordance put on a program with some very serious and highly entertaining cross-over pieces, Saturday, March 29, 2014 at the 92nd Street Y Warburg Lounge at 8pm.  The program was called Eclectic Bands/Eclectic Dance and featured the ensemble Sound Liberation (led by Gene Pritsker), Bruka Band (led by Milicia Paranosic) with William (Bill) Schimmel on accordion, Erbium (led by Dan Cooper), and the ever-exciting Lara St John and guests.  Lara’s Bach is world-class, fresh and effervescent! Bill Schimmel is one of the best accordion performers in the world and always worth making a special trek to hear. Gene Pritsker’s arrangements/compositions of pieces by Bach, Brahms and Stravinsky, with hip-hop and popular crooning vocal tracks were quite refreshing and delightful, to my surprise.  I had a little trouble understanding some of Dan Cooper’s arrangements – couldn’t hear the old master material he manipulated.  Sometimes I get a little stodgy – I love Baroque and Renaissance music straight up, for instance, but this was one of the most entertaining evenings I went to this season! Gene Pritsker released a CD at the concert, too. They’re online at http://www.composersconcordance.com/. RIP Harris Goldsmith. I knew Harris pretty well in the 1980’s when we both wrote for High Fidelity and Opus, and I commissioned him to write a piece for a booklet the New York Philharmonic published in connection with a Beethoven festival – one of my few editing projects. More recently, I used to run into him periodically at concerts – mostly piano recitals at Carnegie. Harris knew everything there was to know about the piano repertory, and particularly Beethoven, and he was a sweet man with an interesting, sometimes peculiar, and usually groanably pun-encrusted sense of humor. He died yesterday at 77.

The Momenta Quartet has a residency at Stern College for Women of Yeshiva University.  On Monday, March 31, 2014, the quartet (Emilie-Anne Gendron, Adda Kridler, violins; Stephanie Griffin, viola; and, Michael Haas, cello) performed a program of music by Jewish composers, with Cheryl Seltzer and Yelena Grinberg, pianos, at the Center for Jewish History (16th St.).  The pieces included Adam Rudolph (b.1955), Morphic Resonance (2013); Ursula Mamlok (b. 1923), Above Clouds (2013/14) for viola and piano (Ms. Griffin and Ms. Seltzer); Charles-Valentin Alkan (1813-88), Sonate de Concert, Op. 47 (1856) with Ms. Grinberg, piano; David Glaser (b. 1952), String Quartet No. 3 (2014); and, Felix Mendelssohn (1809-47), String Quartet in E-flat, Op. 12 (1829). The Alkan piece is an amazing work of Romantic literature and Yelena Grinberg gave a stellar performance. Mendelssohn’s work shows his genius, and the Momenta gave a most exciting and lovely performance, with tight ensemble. Mr. Rudolph’s recent piece had sound clouds, morphic structures and polyrhythms, and was quite intriguing. Ursula Mamlok (who is now over 90) wrote a masterful piece – varied in structure, sound and mood – including “total joy” – that was a most pleasurable treat.  Mr. Glaser, who is professor of music at Stern (and had a lot of young female students in the audience) got a very well-deserved ovation for his new string quartet, a ten minute, one movement piece in four sections, from “crystalline,icy” to “playfully ominous,” which shows modern music writing at its best. This ensemble is one of the City’s and the world’s best – they’re very proficient, extremely well-rehearsed and online at http://www.momentaquartet.com/.

NYFOS Next: Harold Meltzer & Friends was the title of a program that the New York Festival of Song hosted at the National Opera Center (330 7th Av. at 29th St.), free, on Tuesday, April 1, 2014 at 7:30pm. Works of seven other composers and Meltzer were on the program.  Justine Aronson, soprano and Thomas Sauer, piano, performed most of the pieces – Ms. Aronson has fine diction and clear tone – and Mr. Sauer is an excellent pianist. The pieces included Russell Platt, Late Air (with Michael Barrett as pianist); Christopher Cerrone, I will learn to love a person; James Matheson, Clouds Ripped open; Fred Hirsch, Paparazzi; Scott Wheeler, Mozart 1935 (with mezzo soprano Mary Nessinger); Amy Beth Kirsten, to see what I see; and, David Lang, ark luggage (with Mr.Barrett as pianist), as well as two more  complex and delightful pieces by Harold Meltzer himself, from a book of beautiful monsters, with Elizabeth Farnum, soprano, William Anderson and Oren Fader, mandolin and guitar, and Selections from Variations on a Summer Day, with Mary Nessinger, mezzo soprano, Barry Crawford and Jessica Schmitz, flutes, Alan Kay and Jo-Ann Sternberg, clarinet, on text by Wallace Steven. These are all musician’s musicians, and Ms. Farnum and Ms. Nessinger are two of the finest opera singers to perform modern pieces.  I especially liked the LOL humor in Mr. Hersch’s Paparazzi and Mr. Lang’s ark luggage, but the entire selection chosen by Mr. Meltzer was well worth listening to, and each composer understood emotion and craft. http://www.nyfos.org/

Thursday, April 3, 2014, I attended the John Eaton retrospective program of the Biannual International Electroacoustic Music Festival at the CUNY Brooklyn College Conservatory of Music, directed by George (Skip) Brunner. Sopranos Emily Mills Woodruff and Sharon Harms, flutist Bonnie McAlvin and sound engineer Nicholas (Nick) Nelson performed live.  The program included three songs from A Greek Vision on poems by Angelos Sikelianos in the Edmund Keeley translation, to wit, Sparta, Return, Aphrodite Rising; and, Blind Man’s Cry by Tristan Corbiere, translated by Patrick Creigh.  We heard a recording of the mammoth Concert Piece for Syn-Ket and Symphony Orchestra (1966), an awe-inspiring piece, and we saw the DVD of the film of Genesis (1991), live performance using the Eaton-Moog Multiple-Touch-Sensitive Keyboards, a period classic. John Eaton, now 79, helped develop synthesizers for artistic performances, and worked closely with Moog, its primary inventor.  (He was recognized with a MacArthur Foundation “genius” grant years ago.)  Brooklyn College has a rich and varied program of new music and other musical performances that are free and open to the public; the Conservatory is located in Roosevelt Hall (3rd Floor), near the last stop of the #2 Subway.  I was very pleased with the sound of the performers (although I had trouble understanding the words in the resonant studio space). Brooklyn College Conservatory of Music is online at http://bcmusic.org/.

Comments Off on More Spring 2014 NYC Concert Reviews and Notes