The New York Choral Society and the Mannes Orchestra, conducted by David Hayes, presented a program on the main Carnegie Hall (Stern) stage in New York, April 8, 2015 at 8 pm, with John Adams (b. 1947) choral masterpiece, On the Transmigration of Souls, and Paul Hindemith (1895-1963), When Lilacs Last in the Dooryard Bloomed, subtitled, A Requiem For Those We Love. Adams piece was commissioned by the New York Philharmonic as a memorial for 9/11.

The piece starts with a voiced speech – “missing” followed by a vocalise that is orchestrated, and it slowly transforms into a full orchestral piece, with full adult and full children’s choruses, with the continuing narrative of the spoken phrases relating to the collapse of the twin towers of the World Trade Center in New York on September 11, 2001. This Pulitzer Prize-winning piece got a splendid performance by the New York Choral Society and by the Mannes Orchestra, under the baton of David Hayes – an exceptionally steady and able conductor, with a stunning performance by the Young Peoples Chorus of New York City directed by Francisco Nunez. The acoustic shell of the main Carnegie Hall in NYC was the perfect place to hear this outstanding piece. One need not have witnessed the destructive events of that day (as I did, a few blocks away) to feel the uplifting creative power of the Adams choral work.

The Hindemith oratorio, written in 11 sections, which may be structurally grouped into four movements was written to commemorate the death of President Franklin D. Roosevelt, and is based on civil war poems of Walt Whitman that he finished after the assassination of President Abraham Lincoln, as a tribute to him. The piece opens with an orchestral sinfonia, with an airy counterpoint by various instrumental groupings. As this piece unfolds, it presents many different musical forms – all thoughtfully structured, following in the tradition of Bach’s Passions and Brahms’ Deutsche Requiem, and, in Whitman’s poetic American English.  The Choral Society and the Orchestra gave stellar performances of this complex, gorgeous, hour-long piece.  Abigail Fischer, mezzo-soprano, delivered a wonderful performance with an absolutely golden, rich tone, and baritone Lee Poulis gave an extraordinary performance as well. The Hindemith piece, which is rarely performed, is an acknowledged masterpiece by the great German humanist composer (whom Hitler detested), who influenced many American composers during his tenure at Yale (before he returned to Europe after WW II).  I felt privileged to have heard this piece performed in conjunction with the Adams work. Robert Shaw, the most respected of American choral conductors, commissioned the Hindemith piece and he regarded it as one of the most major pieces of the choral literature.  What an amazing program and outstanding performances by the superb soloists and skilled amateurs!

The New York Philharmonic, on April 8-11, 2015, (which I heard on April 11 at 8:30pm) presented a fascinating program conducted by its Music Director, Alan Gilbert, featuring the J. S. Bach, Concerto in C minor for Oboe. Violin, and Strings, BMW 1060 (c. 1717-23); Thierry Escaich (b. 1965), Concerto for Violin, Oboe, and Orchestra (2014-15, U.S. Premiere), with soloists Lisa Batiashvili, violin, and her spouse, Francois Leleux, oboe, as soloists; and, Dmitri Shostakovich’s Tenth Symphony. Alan Gilbert conducted with his hands and only the Shostakovich piece was for a full orchestra.

The Bach piece is very well known; and the Escaich work is based upon it – he borrows melodic material from that piece in rearranged and transposed form – and that piece shows off the sonorities of the solo instruments – Leleux’s oboe and Batiashvili’s violin. The orchestra echoes the soloists parts and provides counterpoint as a background – much like a musical tapestry. The virtuosic interplay between the two (spousal) soloists was tremendously exciting. Alan Gilbert’s conducting, with his hand, was precise and invigorating – he’s one of the best conductors in the world. The orchestra’s performance, spirited and lively, was splendid.

As for the Shostakovich Tenth Symphony, this monumental hour-plus work is also very well known and highly regarded. If the Soviet Union of Composers called Dmitri Shostakovich’s Tenth Symphony an “optimistic tragedy” that was spot on. The piece is lovely, yet sombre – it was started in the early 1950s and finished after Stalin’s death. The beautiful, but dirge-like opening music, for instance, transforms into an energetic and insistent full-orchestral parade – before it drifts back into the soft twilight of strings and airy woodwinds. This was an excellent performance of this lengthy masterwork. 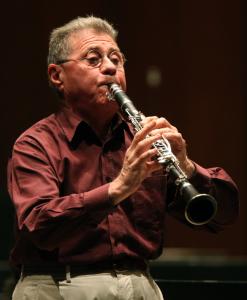 The South Shore Symphony, of which Scott Jackson Wiley is the Music Director, held a program called All Mozart with Stanley Drucker (at left), conducted by David Bernard (who regularly conducts the Park Avenue Chamber Symphony in New York) at the Molloy College Madison Theatre in Rockville Centre, Long Island, April 18, 2014, at 8 pm.

W. A. Mozart  (1756-1791), who died young in his 30s is, of course, a legendary composer.  This amateur orchestra, which had some fine musicians playing in it, gave a fine performance of Mozart’s Symphony No. 41 in C Major, K. 551, Jupiter, with a lot of energy and reasonably tight and ensemble; and, by and large, most of the musicians had good intonation and phrasing. I enjoyed this taut and energetic performance, which David Bernard shaped in four rehearsals.

The highlight of the program, however, was revisiting the incomparable Stanley Drucker, clarinet soloist, in Mozart’s Clarinet Concerto K. 622 in A major, which was Mozart’s last piece – other than the Requiem, which he did not finish. Drucker, who had performed with the New York Philharmonic for over fifty years (since, I believe, not only Arturo Toscanini’s, but also Leonard Bernstein’s days), is still one of the finest clarinet performers in the world – a musician’s musician.

The program opened with Mozart’s Overture in D, K. 320, Posthorn, which he wrote when he was 21.  Mozart is Mozart – his music is enjoyable.  I was glad to find out, however, that the Symphony tackled the work of a living composer, Keith Emerson, the noted rocker, earlier in the year, and is receptive to performing the works of living composers, which is important –  the music must be playable by the orchestra and pleasing to the audience, in order to maintain it, but the players are willing to do it and the audience members willing to listen.  (I live on Long Island and it was pleasant not to commute for a change.)

The orchestra is at http://sssymphony.org/.

The Juilliard Orchestra, conducted by Jeffrey Milarsky (seen above), featured four World Premieres by Julliard composers, April 28, 2015, 8 pm at Alice Tully Hall at Lincoln Center in New York, NY. The four student composers and their works were Aaron Severini, Sleet;  Michael Seltenreich, ARCHETYPE (winner of the 2015 Arthur Friedman compositon prize); Chason Goldfinger, Ghosts of Iron, Memories of Stone; and, Joshua Cerdenia, Magayon.  (All of these composers described their pieces and their motivations for writing them in the program notes.)  I was very positively impressed by the level of musicality, of craft, and of passion in these full orchestral pieces, which are calling cards for these very talented young composers, who are all skilled professionals.  Likewise, under the most adept direction of conductor Milarsky, the Julliard Orchestra showed virtuosic technique of the young performers, tight ensemble, and very fine control of dynamics (which is not easy).  Here are my contemporaneous notes:

Aaron Severin, Sleet:  Although the piece enters kicking with raucous energy, it is well-organized, transparent enough, and has clear melodic lines and coherent soundbursts, so that it is not only high-octane, but also highly communicative. The arch excitedly builds to a final collapse.

Michael Seltenreich, ARCHETYPE:  From the first bar of the piece, listening to short and long melodic lines and sonic clouds, one finds a lot of dramatic coloration – very fresh, lyrical and estatic.  Jazz and modernist elements exist in the sound palette, but one is struck by its colorful vision and freedom – this music exists in a world post-Messiaen that revels in expressive color.

Chason Goldfinger, Ghosts of Iron, Memories of Stone: This piece opens quietly and reflectively, with individual voices slowly blending into melodic lines – poetic, visceral, visual, and auditorily pleasing.  This young composer paints a visionary piece, with exquisite sound, drama, and clarity of thought, as well as with heartfelt emotion and focused intensity. The music is also spatialized at one point, with a string section on the balcony, and it employs chimes and traditional harmonic forms with delicate passion and brilliant technique – very Brahmsian and very succinct.

Joshua Cerdenia, Magayon:  This orchestral piece is youthful, energetic, colorful, and intensely passionate.  The piece relentlessly drives forward, dancing with pulsing energy and tutti forces – like a volcanic eruption, colorful and forceful. When it turns reflective, it becomes lovely and atmospheric.

Overall, not only was I very pleased at the quality of the work and the passion of the composers – the audience, too, was very enthusiastic and receptive, with several loud ovations at their favorite pieces – but I felt optimistic toward the future of classical music, with composers, performance and audience all participating in a process of opening themselves up to experimentation, to tradition, to craft, and to intense and flowing musicality of unknown dimensions – listening to new music by unknown composers, who all made their mark with their pieces.  It was a joy to be in their company celebrating the birth of these new pieces.

More about Juilliard Orchestras at http://www.juilliard.edu/degrees-programs/music/performance-ensembles-and-opportunities/orchestras