Comments Off on Musical Hydrology or Hydrological Music? An Interview with Judith Lang Zaimont 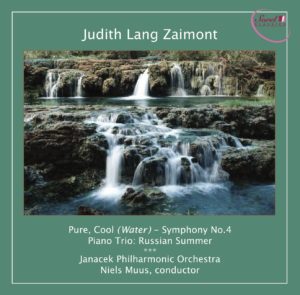 The indefatigable Judith Lang Zaimont has been having her musical works performed and recorded for decades now, and their consistent superior quality is certainly ample justification for this. Her latest CD, containing two major works, provided an opportunity to explore further some of her views on her art and matters related to it. I caught up with her in mid-January of 2016 to probe her on these aspects.

When we last communicated, you answered my question about what was coming next from the Zaimont studio with a statement that you were just finishing the short score of your Fourth Symphony, Pure, Cool (Water). A few years later, and here I am reviewing the work, and speaking with you about it! What does it feel like as a composer to complete a work of this scope, and have it recorded within a short time of its completion? Did it turn out as you expected?

Absolutely—especially when the tempi are right on! As far as hearing a work shortly after it’s finished—isn’t that something we’d always like to have happen?

Speaking more broadly, how much resemblance does a finished work of yours generally bear to its conception in your mind before you actually began writing it?

Before I start a piece I need to feel compelled to write it by the actual materials I’ve invented: If the essential materials start to “hypnotize” me with their possibilities, then I’m off and running. However, while I may think I know what the proportions of the new piece’s form will be, at times these get altered considerably as the piece is actually worked out. But, in general, I believe I’m clear ahead of time about the form itself—surprise! Rollo May wrote of “the courage to create.” Composing is always, always an adventure.

You mentioned to me in a discussion preliminary to this interview that you’d tempered your style somewhat in certain portions of Pure, Cool (Water) in deference to the musical tastes of your father, a chemist specializing in hydrology. Did he have an opportunity to hear the work, and if so, what was his reaction to it?

I think my essential voice is more abstract, somewhat abrupt, but I did determine to emphasize tune and flow in this symphony—Dad responded best to melody—and to consciously try to work in more “major” frames (instead of types of minor modes). And I love melody too, such as the long unending strand of golden tune in the Con moto moderato movement of Mendelssohn’s “Italian” Symphony. Though he passed away a decade ago, my father did repeatedly enjoy an earlier parlor piece I wrote specifically for him (for my sister and myself to play), Snazzy Sonata. I think he would have responded especially well to the symphony’s opening movement, “The River,” with its opening trombone melody and the atmosphere of an older, more settled stream. I might add that the movement of Pure, Cool (Water) I identify most closely with is “Ice.” It has passion, but is damped down.

Living in Arizona, an arid portion of the United States, do you think a good bit about the essence of water and its life-giving characteristics? I assume that as a resident of that state, the substance is not something that you take for granted.

We’ve been in a long-term drought and access to water is a perennial issue here in the southwest. We pay close attention to the falling levels of Lake Mead, to occasional water rationing, and to discussion, speculation, and unending negotiations surrounding how to share fairly with Mexico and other western states the allocations from the Colorado River.

What was the impetus for your writing, Russian Summer, the piano trio also included on the present CD? Where does the title come from?

My first piano trio pays tribute to my Eastern European lineage (Hungarian, Russian, and Polish). The gypsy-like tune for the last movement was something I simply whistled one afternoon, while I was walking in the sunshine. The weather was lovely that day as we were just coming into summertime: thus, the title!

Your music has been recorded on a dozen or more different labels by now, but I haven’t encountered it previously on the Sorel CD label. What led to your association with this company?

The Sorel Organization retrospectively commissioned Pure, Cool (Water) via naming me as their 2014 Commissioned Composer. To my amazement their generous support didn’t stop there: They selected a fine orchestra for the world premiere, plus a top-notch conductor, and also supported separate recording sessions (following a mid-European tour) to capture the piece on disc. Everything was their decision—and I am grateful indeed for the large vision, gumption and commitment, and unending goodwill towards my music expressed by the Sorel Organization executive director, Judy Cope.

The last time we conversed, you also mentioned that you were interested in filling “holes” in your repertory. What works have you composed the past four years that have accomplished that?

If there were just one work that you have written that you would most like to be remembered for, which one would it be? Another way to ask that question is, “Is there any particular work of yours that sums you up as a composer?”

Easy answer: “The next one!” Thoughtful answer: The pieces that capture the dual nature of my artistic self, that is, the romantic and passionate, and the hyper-analytical. So, these works would include my Zones, Piano Trio No. 2; my String Quartet, “The Figure”; my Violin Sonata-Rhapsody; my cantata, Parable; my orchestral work, Chroma – Northern Lights; and, especially, the “Growler” movement from my Symphony for Wind Orchestra in Three Scenes.

So what’s coming next from the workshop of Judith Lang Zaimont?

In the spring of 2016, there will be a premiere of Mondale Cycle, a half-hour long piece for dramatic tenor and chamber orchestra commissioned by the Three Bridges International Festival in Duluth. The original libretto was developed by poet Louis Jenkins and myself, and is based on the poems by Jenkins from the mid-1970s to 2014. The work is a tribute to the life and philosophy of Vice President Walter Mondale and his family. Also, I’ll be composing the competition piece for the 2017 American Pianists Association competition, and another 2017 piece for contraforte and piano. The enthusiastic U.S. performer who is commissioning the piece indicated that the contraforte is a “souped-up contrabassoon” with extended range, a distinct sound, much greater ease in playing due to its different and wider bore. The instrument was invented and produced by Benedikt Eppelsheim and Guntram Wolf. I’m also planning to write more orchestral music.

This article originally appeared in Issue 39:5 (May/June 2016) of Fanfare Magazine. Reprinted with permission.

Comments Off on Musical Hydrology or Hydrological Music? An Interview with Judith Lang Zaimont