The Jackson Heights Orchestra in Concert – A Review by Mark Greenfest 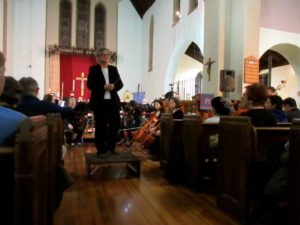 The Jackson Heights Orchestra, conducted by Patricia Glunt, had a concert on December 14, 2016 at St. Marks Episcopal Church in Jackson Heights, Queens, N.Y., featuring Thomas Piercy, clarinet soloist, and Peri Mauer, guest composer.  The program included J.S. Bach, (1685-1750), arranged by Stokowski, chorale (nicknamed Giant Fugue) Wir Glauben All An Einen Gott (circa 1739); Peri Mauer, All Along the Heights (World Premiere); Franz Krommer (1759-1831), Concerto for Clarinet and Orchestra, opus 36 (published 1803); and W.A. Mozart (1756-91), Symphony No. 35 in D major, K. 385 (Haffner) (1782), with a holiday reception and wine tasting.  The orchestra is quite good and consists of many professional musicians and professional caliber ones, such as concertmaster Susan Metcalf, who performs with several respected orchestras in leadership roles, and Amanda Keill, French horn, who is establishing a notable reputation as an opera singer and director of a Baroque ensemble. Thomas Piercy is an internationally recognized artist as a clarinet performer – reviewed as “brilliant” in the New York Times.  Pat Glunt kept tight ensemble as conductor, and the orchestra performed with verve, particularly 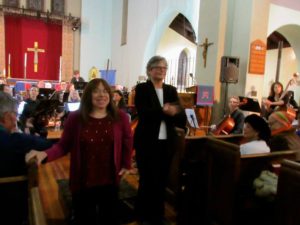 Composer Peri Mauer takes a bow alongside Patricia Glunt, conductor, after the premiere of her piece All Along the Heights, composed for the Jackson Heights Orchestra.

in the outstanding premiere by Ms. Mauer.  Her piece, All Along the Heights (2016), commissioned by this orchestra, opens with an amiable dance, with some mariachi percussion, and various syncopations, which expands into a series of lyrical and colorful vignettes – akin to Aaron Copland’s Americana style, with a very light and lively touch at orchestration that is of the same caliber of that great master’s.  Some passages presented dissonances, although most of the piece was consonant – the balance and variety of this through-composed excursion in musical exploration is delightful.  Both the members of  the orchestra and the audience seemed to love the piece and praised it. 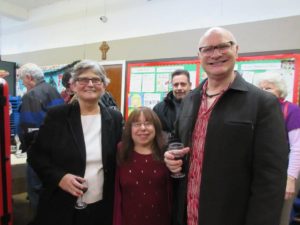