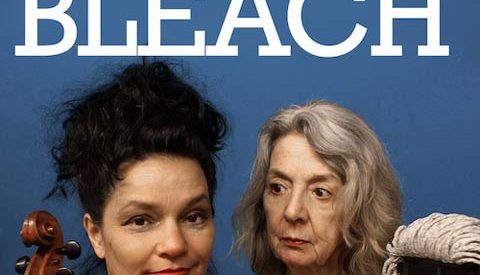 Bach & Bleach is about memory – the types of memories that listening to beautifully performed music can bring, both good and bad.

It’s also about imagination, and the imagery that many different types of music and musical sounds can suggest.

And, it’s also about the attempted resolution of the eternal conflict of art versus everyday life, such as it is – the sacred versus the mundane.

The memory aspect is explored mostly through the appearance of a disruptive cleaning lady (played wonderfully and winningly by Jenny Sterlin) in the midst of a rehearsal by world-class violist Esther Apituley (playing herself) and a mixed ensemble of players. At first, of course, it leads to conflict and frustration on both sides. Then, as we learn more about both of their stories, the cleaning lady having been a refugee from the 1990s conflict in the Balkans, and the violist’s family having moved from several different countries before finally settling in The Netherlands, we see them come to better understand each other.

Very witty, pointed, and revealing dialog is often directed at the audience, and brings them into the center of things, while at the same time bringing the two women closer to the same place. The music is also at the heart of this, especially in once scene where the violist suggests that the audience relax and think about what imagery an unaccompanied Bach Chaconne suggests to them. The cleaning lady pauses and allows herself to fall into a reverie, which, given what we later learn of her time in war-torn Bosnia, is extremely poignant.

Several other times throughout the show, Ms. Apituley engages the audience in exercising their imaginations during performances by her and the ensemble, and even asks them to share their impressions. Audience participation put to good use.

The show also, whether intentionally or not, brings up the subject of art versus life. The cleaning lady is at first invisible, and only a distraction, but through what we learn of her years in the midst of conflict and her knowledge of physics (well used several times throughout the evening), she gains dimension and humanity. At the same time, the artist, Ms. Apituley, especially having presented some beautiful Bach, is humanized and given greater dimension by her story of displacement and her deep love of music, as well as her growing compassion for the story of the cleaning lady. The sacred and the mundane have more in common than they realize.

There are many tangents and side trips along the way, but the two central characters become more interesting with each one.

All of this, of course, always leads back to the music.

Ms. Apituley is joined by the Locomotiv Band – violinists Emily Uematsu and Carolin Pook, cellist Chanel Karimkhani, bassist James Robbins, pianist Carlos Horns and percussionist Ethan Cohen, as well as one of the world’s great jazz musicians, harmonica virtuoso Gregoire Maret. Many of them play solos or in mixed ensembles, performing (beautifully) music by the aforementioned J.S. Bach, as well as Britten, Paganini, Faure, Purcell, Shostakovich and Handel-Halverson from the classical world, and Bob Zimmerman from the jazz world. In addition, pieces written by cellist Karimkhani and harmonicat Maret are performed by their composers.

There’s a sort of surprise ending, with the two principles and the ensemble joined by a choral ensemble of sanitation engineers, whose lovely sound seems to re-enforce the universality of music , memory and how shared experience, and the sharing of that shared experience, can bring us closer together.

The audience loved it, and responded very enthusiastically to the performance.

I should also mention the very good use of this large, open downstairs space for the performance. The intimate atmosphere of this agreeably distressed, brick-walled, patterned-ceilinged area suggested an expansiveness of performance that was put to very good use and probably allowed the capacity audience greater range to explore the themes Bach & Bleach suggested than a smaller space might have.