Comments Off on 70th Birthday Concert for Leonard Lehrman and Charles Osborne, with the Metropolitan Philharmonic Chorus – 8/18/19 in Roslyn, NY

with the Metropolitan Philharmonic Chorus 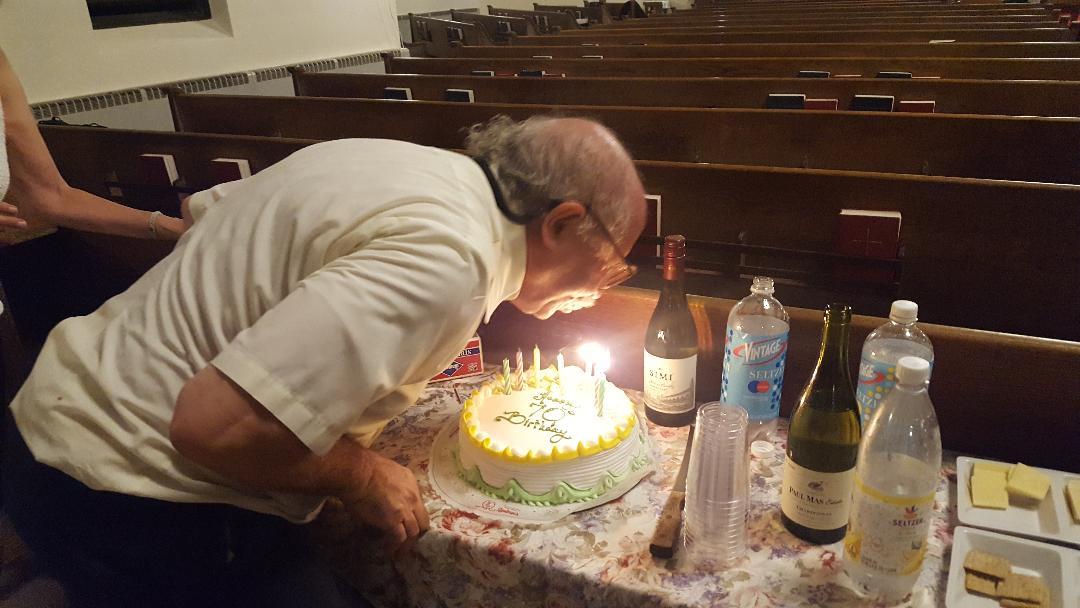 When I was invited to review this concert, I felt some trepidation. I’m a folksinger, and I don’t know much about classical music beyond what I learned in Music Appreciation 101 in college. I was afraid that I would be out of my depth, trying to comprehend and explicate the pieces performed.

I needn’t have worried. This was some of the most down-home, salt-of-the-earth, accessible music I’ve ever had the pleasure of hearing. Many of the pieces were musical settings of familiar poems. Some were original poems, by Leonard Lehrman or others, set to music. For every piece, the context was explained and the way each fit in with the others was easy to comprehend. The 16-page program included all the lyrics, in addition to bios of the composers and the singers; as well as the astounding number of authors of texts set to music by the incredibly prolific Leonard Lehrman. It would seem that one would need far more than 70 years to produce that much art. 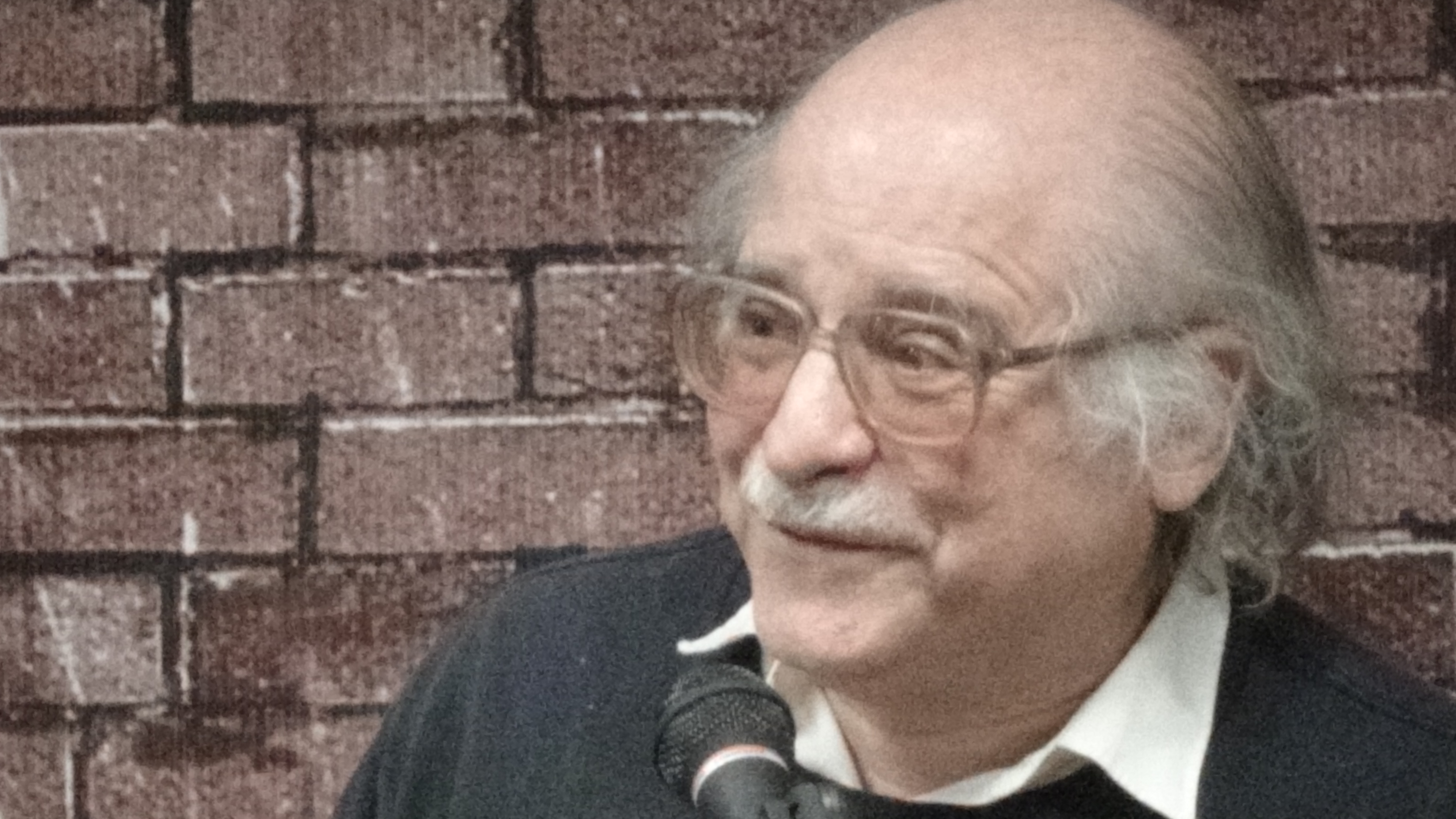 This concert was indeed a celebration of the 70th birthdays, coming in the same week, of two old friends, Leonard Lehrman (seen above) and Charles Osborne (seen below).  Thus, it consisted entirely of works by the two men. They had held similar celebrations at their 40th and 60th birthdays, as well as at the 2002 wedding of Leonard Lehrman and Helene Williams, at which Osborne had officiated. This time, however, there was a difference: Osborne was unable to attend in person. He was there virtually, thanks to Skype, and the audience got to see and hear him, and vice versa, throughout the evening. Gregory Mercer, Conductor of the Bel Canto Chorale for the last 15 years, filled in ably as conductor on Osborne’s pieces, which Osborne had been slated to conduct.

Many of the works had a Jewish theme, reflecting Lehrman’s and Osborne’s religious tradition. Some of those that stood out for me included a cantata written by Lehrman for his bar mitzvah – his first composition that was publicly performed, entitled “Prayer for Peace.” Osborne’s “Samachti B’omrim Li” (Psalm 122) is his best-known piece, but I was also enraptured by his setting of the famous quote from the Talmud: “Whosoever saves a single life, it is as if he had saved the entire world.”

Other works set to music included poems by such iconic poets as Langston Hughes, Robert Frost, e.e. cummings, Federico Garcia Lorca, Vladimir Mayakovsky, and W. B. Yeats. There were also poems by Lehrman, his wife Helene, and friends Jane Collins and George Wallace. Wallace, Suffolk County’s first Poet Laureate, was present at the concert, also celebrating his 70th birthday this year. One of the most charming pieces was “12 Jewish Haiku” by Leonard Lehrman. Hard to pick out the best of these, but here’s an example:

Is one Nobel Prize too/much to ask from a child,/after all I’ve done?

The concert had the air of a family reunion, and indeed, besides the two close friends and husband and wife team of Lehrman and Williams, Lehrman’s 96-year-old father was present at the concert, kvelling, as well he should, at his son’s success. 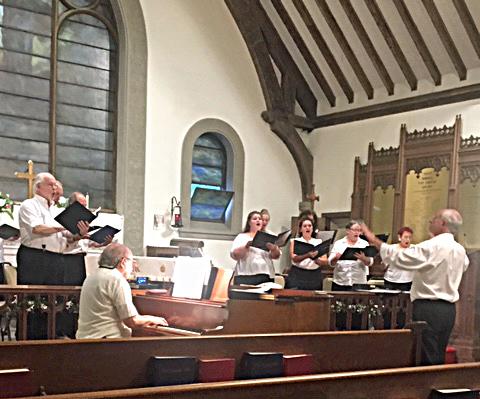 But I must not fail to mention the professionalism and soaring voices of the Metropolitan Philharmonic Chorus. Many of the pieces, especially the solos, required not just singing but acting; all brought the music to life and wedded the melodies to the lyrics impeccably. I hesitate to single anyone out, as they were all so excellent, but Michael Niemann’s rendition of e.e. cummings’ “next to of course god…” was particularly memorable. And though I mentioned how accessible most of the music was, some of the pieces were quite challenging, with dissonant harmonies and unusual time signatures; the chorus mastered it all.

I should also mention that the Trinity Episcopal Church in Roslyn, N.Y. where the concert was held, seemed itself to be one of the performers. It is a magnificent building dating to 1906, with five Tiffany stained-glass windows and an arched, 80-foot ceiling which made for perfect acoustics.

To complete the family-like atmosphere, at the conclusion of the concert, the audience was invited to join the composer and singers in birthday cake, cheese and crackers, and wine. Attached is a picture of Leonard blowing out the candles on the cake, on which is simply written, “Happy 70th Birthday,” as it was intended to be shared by Lehrman and Osborne. I feel grateful to have been invited to attend this concert, and privileged to be able to share just a small part of its treasures with the public, in hopes that they will vow to attend a Leonard Lehrman extravaganza in the future.

Here is a link to the video recording of the concert: https://www.youtube.com/playlist?list=PLmhHI8m9j-XuiRpZqpQvdgieWQZz60mJv

Comments Off on 70th Birthday Concert for Leonard Lehrman and Charles Osborne, with the Metropolitan Philharmonic Chorus – 8/18/19 in Roslyn, NY