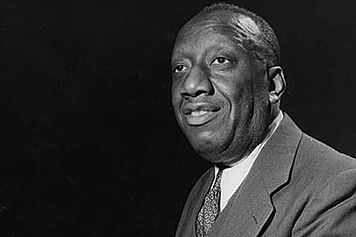 All score reductions by the author. Read an analysis of the Symphony’s first movement at http://www.soundwordsight.com/2019/07/james-p-johnson-harlem-symphony-1932-first-movement-penn-station-subway-ride-an-analysis-by-kyle-gann/

and the second movement at http://www.soundwordsight.com/2019/08/james-p-johnson-harlem-symphony-1932-second-movement-song-of-harlem-april-in-harlem-an-analysis-by-kyle-gann/ 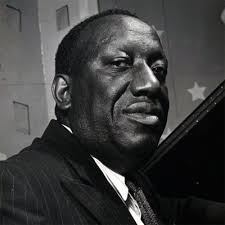 Johnson’s third movement, “The Night Club,” is a Harlem dance as scherzo. Look at all the section measure numbers up to 164, and you can see they’re all divisible by four: this is a scherzo you can dance to. Johnson labels the second section “Trio,” but what follows it, contrary to classical practice, is not a repeat of the first section. The first section moves from Bb quickly to Eb, and the Trio is in Ab, but the remainder of the piece is in C. The entire piece, though, is imbued with what jazzers call “Rhythm changes” (after Gershwin’s song “I’ve Got Rhythm”) – the chords VI-II-V-I. In fact, the deployment of this progression subtly differentiates the first and second halves. Until m. 84, every new theme starts on a I chord followed by vi-II-V in half-notes. From the start of the trio on, each new theme starts on a VI chord (V7/ii in classical terms), and moves through II, V, and I on whole notes, and this continues to be so in the final section in C major. Beginning each new phrase on V7/ii in the second half adds a new urgency to the music (you never know whether it’s the beginning of a new modulation), and seems to up the craziness level of the dance a little. Johnson clearly knew how to exploit such subtleties.

The movement starts with a hesitant, atmosphere-setting twelve-bar introduction, moving from Eb major with an added sixth to a Db dominant major ninth and back.

The first theme, in the violins, is sixteen bars, the last of which is diverted to a V7 of Bb, and the tune is restated in Bb in the trumpet, and it is clear that the eighth-notes must be swung. Comparison of the two consecutive versions how much freedom Johnson treats his melody with – as, in jazz, why would the trumpet play it the same way the strings do?

In fact, the trumpets replace the third phrase with a comedic reference to the I-VI-II-V that runs through the harmony.

The sixteen-bar transition that begins at m. 45 begins each half with a faux-dramatic passage of diminished seventh chords and dominants before relaxing each time into the dotted note texture prevalent earlier.

This leads to another statement of the first theme similar to the first, but in the upper winds. The bridge to the trio is an eight-measure pedal on Eb using jazzy syncopated chords to prepare for the Ab-major of the trio.

In mm. 85-132 the trio theme is repeated three times in varying orchestrations. Unlike the first theme, it begins more anxiously on the IV chord (V7/ii, actually) rather than on the tonic. This example from the second statement shows how thick Johnson’s orchestration becomes, with the theme here once again in the trio of clarinets. Even more striking are the stride piano patterns in the strings, showing that at this point Johnson was simply orchestrating the piano style he spent his life playing. 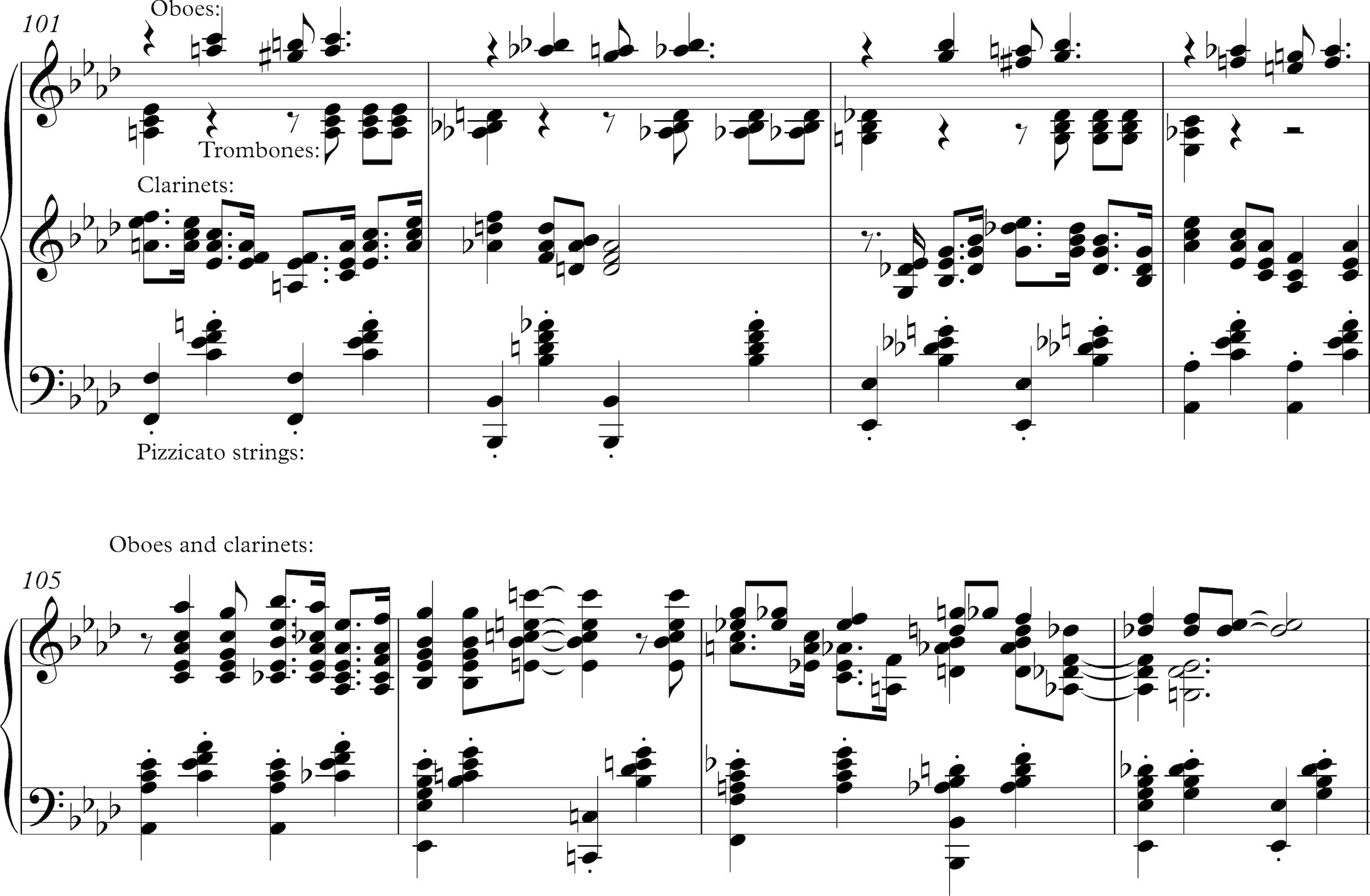 The third appearance of the trio theme turns to V7 of C just at the end, and over a VI-II-V-I in the low strings comes the most bracing section of the work: a back and forth of glissandos between the winds and strings, sometimes in both directions at once. No transcription could give the passage its due as well as the manuscript can. 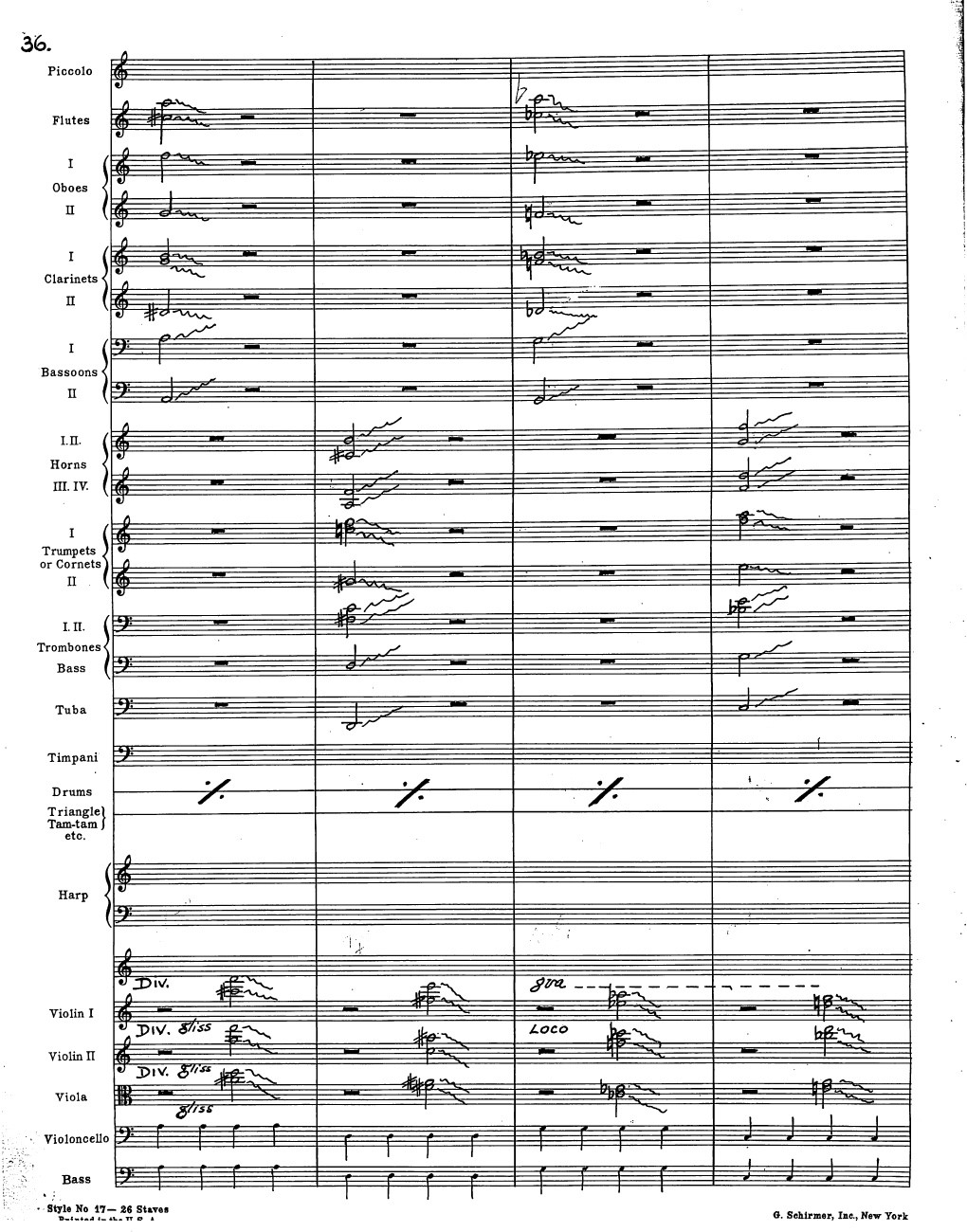 The glissando section leads into a pair of sixteen-bar melodies on the by-now-familiar harmonic pattern, the first riotously orchestrated in a call-and-answer pattern.

The second is similar, but in tutti chords, and interrupted at the end, in time-honored Swing Era fashion, by a couple of piccolo cadenzas, before a dramatic final cadence with an augmented dominant.