Shadows of the World – A Film by Marios Papageorgiou 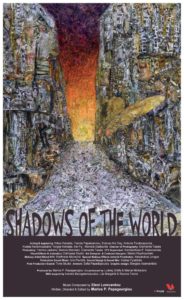 The possibility of catastrophe, whether from Nature, man-made or viral (in both meanings of that word), seems to be at or near the top of many people’s minds. Although it’s always happened in one way or another, the nuclear age and now climate change and a worldwide pandemic have brought the possibilities, and understanding of the consequences, into very sharp relief.

Marios Papageorgiou’s film Shadows of the World shows in extremely graphic detail the aftermath and human toll of such an event. Four men fight in a place that makes survival all but impossible; the only things resembling civilization they find are remnants of a birthday party, including an illusory cake that first appears to be edible, but has actually, like everything else, gone to ruin.

There have been any number of such visions of apocalypse, but far too often, they end with some hopeful and even cheery image, like flowers growing up through the rubble. However, it seems unlikely that things would end this way.

Mr. Papageorgiou has given us a small, but no doubt universal, vision of the aftermath of catastrophe. Images in the film suggest that this one was climate related, but the viewer is free to associate it with whichever version of such events they feel most passionate about.

Cinematography by Diamantis Tassis is exceptional, as is the production design by Manto Psychountaki.

The electroacoustic score by Eleni Lomvardou complements and elevates the images into the realm of the tragic, and uses wordless vocals and solo viola to further enhance the sadness of the end images, as underscored by the electronics. The music integrates beautifully with the scenes of desolation, and the viewer gets the sense that it seems to have been composed while working closely with the director, almost in the classic way of Prokofiev and Eisenstein.