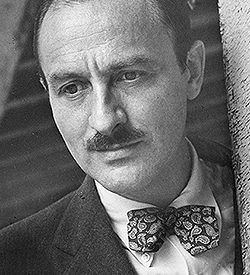 Testimonial by Leonard Lehrman, December 2016 – Please see an extensive list of links (in order of which references appear) to more information about many subjects mentioned in this article below. 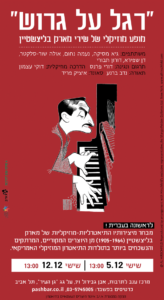 It is entirely fitting that a plaque be placed in June 2017 at the birthplace in Philadelphia of one of America’s most gifted and socially-conscious creators of both music and words, on the 80th anniversary of the opening of his best-known original work: The Cradle Will Rock.  Eighty is a good number. It was at the celebration of Blitzstein’s 80th birthday, in 1985, that Leonard Bernstein first performed Blitzstein’s song “Zipperfly” in public, at a concert supervised by Michael Barrett and Steven Bleier, who subsequently founded the New York Festival of Song (NYFoS).  And Cradle is a seminal work of American musical theatre, a “play in music” which defies the boundaries of opera vs. musical and has been an inspiration for creations ranging from On the Town  to West Side Story to Urinetown and musical courtroom scenes like those in my E.G.: A Musical Portrait of Emma Goldman (with Karen Ruoff Kramer), The Triangle Fire (with Philadelphia librettist Ellen Frankel), and Blitzstein’s own magnum opus, Sacco and Vanzetti.

Aside from the 1991 Scottish Opera production of Regina, I believe Cradle is the only original full-length Blitzstein work to be performed in Europe (in England, Germany, and Spain).  But other works of his have been translated into Italian, Yiddish, and Hebrew (see poster above left), and have been performed in Israel and, most recently, in Belarus and Russia (excerpts from his American-Russian Friendship Musical, Goloopchik).

Yet after over 150 productions, there has still been no definitive production of Cradle, and the same may be said of just about every other work of Blitzstein’s, except for his Threepenny Opera adaptation/translation for and starring Lotte Lenya, which has never been equaled by any other production or translation since.  (That’s true even of his other translations, including a beautiful Mother Courage which deserves a cast of stars, and a Mahagonny which except for two excerpts at his 2005 Centennial Concerts has never been performed at all!)  The cancellation of the original Orson Welles-John Houseman production of Cradle, for the Federal Theater Project, using glass wagons and full orchestra, was widely seen as the result of government censorship, resulting in a spectacular make-shift protest evening at another theater further uptown, with Blitzstein at the piano and actors in the audience, “speaking their piece when their cue comes.” 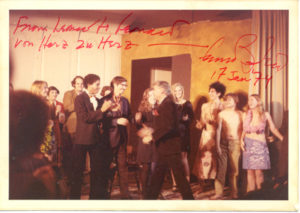 I first became acquainted with Blitzstein’s work through his friend Elie Siegmeister, who loaned me his score of Cradle.  It is still a crime and a shame that both that score and the Blitzstein Threepenny  are available only for rental, not for purchase.  When in 1969 at Harvard I directed and conducted the first production of Cradle in Boston since Bernstein’s of 1939, Bernstein learned of it and remarked: “I’m glad somebody at Harvard still has taste.”  On his and Siegmeister’s encouragement, I did research on other works of Blitzstein, in Philadelphia  (where I got to play on his piano, at his nephew’s house in Overbrook) and at the State Historical Society in Madison, Wisconsin.  (The family later gave me numerous music scores of others’ works he had left on his piano, including Siegmeister’s first opera, Darling Corie.)  After attending the Dec. 5, 1970 Boston premieres of Blitzstein’s Harpies and I’ve Got the Tune, in my adaptations, together with his own Trouble in Tahiti (dedicated to Blitzstein), Bernstein (seen above greeting Leonard Lehrman – ed.) was asked about my completing the unfinished opera after Bernard Malamud’s story, Idiots First.  “You really want to try to finish it?”  He himself had tried, for months, and given up, for emotional reasons. “I’d like to try.”  He then took me in his arms and murmured: “God bless you.” 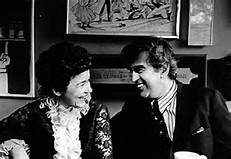 In Dec. 1973-Jan. 1974 I played my completion for Siegmeister (who called me “Alfano,” after the completor of Puccini’s Turandot), Malamud, the Blitzstein family, David Diamond and Richard Flusser (of the After Dinner Opera Company, which had revived Blitzstein’s Triple Sec), and finally Bernstein, who gave his approval, and later told Flusser: “Leonard Lehrman is Marc Blitzstein’s dybbuk.”   The word refers to a spirit of the dead that returns to earth to complete an unfinished task.  In Blitzstein’s case, I have now adapted/completed 20 of his works, edited the 3-volume Marc Blitzstein Songbook for Boosey & Hawkes, and authored Marc Blitzstein: A Bio-Bibliography for Greenwood Press.  The most important of these completions is the opera commissioned by the Ford Foundation and optioned by the Metropolitan Opera, Sacco and Vanzetti.  Brenda Lewis (seen below), who 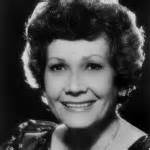 originated the role of Birdie and was most famous in the title role in Blitzstein’s opera Regina, told me categorically: “Everything Marc wrote, everything, was only preparation for Sacco and Vanzetti!”  Italian musicologist Maria Cristina Fava has written on how the McCarthyism of the 1950s was responsible for impeding the creation of that work.  That the denigration of dissidents and immigrants is an issue of importance today is hardly disputable, especially given that McCarthy’s right-hand man, Roy Cohn, was a mentor of our current President-elect.  Actually, Sacco was the end of a long line of Blitzstein works sympathetically depicting immigrants and non-native English speech, from Poles in Cradle to Greeks in No for an Answer, Irish in Juno, Jews in Tales of Malamud and Italians in Sacco.

Regarding the latter work, Charles Osborne, who created the title role in the 1978 award-winning NY premiere production of Idiots First, attended the 2001 White Barn Theatre premiere, concertante, with piano, and labeled it “a masterpiece.”  And Stephen Wadsworth, Bernstein’s co-librettist in A Quiet Place and Director of Juilliard’s Artist Diploma in Opera Studies, as well as Head of the Met’s Lindemann Young Artists Dept. Program, has written, “The stage works of Marc Blitzstein are milestones in the development of American opera—even those he left unfinished.  I studied Leonard Lehrman’s completion of Sacco and Vanzetti, for example, with great interest and pleasure.  It may not all be the work of Blitzstein himself, but how much better to hear a lovingly completed version than not to hear the piece at all!  We listen all the time to Turandot, Lulu, La Clemenza di Tito, and the Monteverdi operas as completed and realized by others; it’s time to pay attention to one of the major operatic ventures in the American canon. ”  (email, Nov. 25, 2016).

It’s time indeed!  And how fortunate to think that someone in the future, passing the house where Marc Blitzstein was born, will see this plaque, and ask: “Who was this man, and what did he do?” The question for that person, and for us, will then be: “And what remains to be done!?”

The Cradle Will Rock – https://en.wikipedia.org/wiki/ The_Cradle_Will_Rock