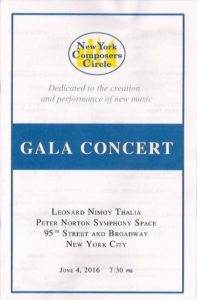 The New York Composers Circle presented a concert on June 4, 2016 at 7:30 pm at the Leonard Nimoy/Thalia Theater at Symphony Space in New York.  This year, the NYCC lost one of its honorary members, John Eaton, who was a regular attendee at their Salons, where they workshop new pieces, and at their concerts. He was a MacArthur grant winner, and one of the major figures in American music, as well as a charming bon vivant and friend.

The program opened with Raoul Pleskow’s Imaginary Landscape for Piano 4-Hands, with Chris Oldfather and Fredrica Wyman, piano. Both pianists are excellent artists – Chris has a worldwide reputation now – and Raoul Pleskow was the European refugee successor to Stefan Wolpe (at C.W. Post College of Long Island University). Pleskow’s work, although complex at times and 12-tonal, has a lot of integrity and beauty and emotional appeal. It is by no means random and has guiding intelligence and feeling.

Madelyn Byrne’s Northern Flight, with Shia-uen Ding, piano, followed.  It is a piece for acoustic and computer generated sounds.  “The power and beauty of winter holds endless fascination for me,” she writes, “perhaps because I grew up in Florida and New York.”  It is a sophisticated piece with fascinating passages and well-crafted.  I enjoyed it a lot. 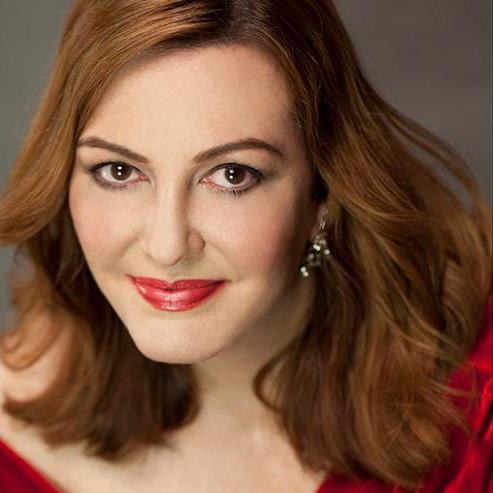 Next, the program turned operatic with Patricia Leonard, Three arias from My Dearest Friend, words by Abigail Adams (wife of future President John Adams, chairman of the War Committee of the Continental Congress), to wit, The Great Distance, Remember the Ladies, and How Lonely Are My Days.  Ms. Leonard writes very well for the voice and knows how to support it, so that every word was understandable.  The relationship between John and Abigail Adams, and Abigail Adam’s own strength of character are legendary. These arias showcased the opera which then premiered in Massachusetts to critical and audience acclaim. Wendy Bryn Harmer, soprano was joined and accompanied by Christopher Oldfather on the piano.  I first heard Ms. Bryn Harmer when she sang as the lead at the New York City Opera; she has a clear and golden tone.

The first half ended with Max Giteck Duykers’ Cut and Fold, with Gregor Kitzis, violin, Dave Eggar, cello, and Christopher Oldfather, piano. Dr. Duykers just completed his Ph.D. with Shiela Silver as his mentor at S.U.N.Y. at Stony Brook. His work is smart and interesting.  “The piece explores driving rhythmic textures and their eventual transcendence into melodic fragments.  Imagine little glimpses of rich language or emotion, spliced together to create a mosaic of colors and edges,” he wrote. 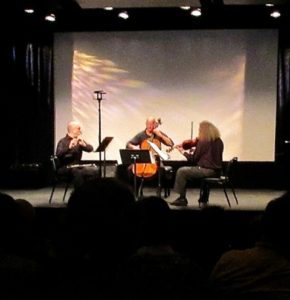 After intermission, Peri Mauer’s Thought’s Torsion led, with Michael Laderman, flute, Gregor Kitzis, viola, and Dave Eggar, cello. All three are nationally recognized performers of the first caliber. Ms. Mauer, who is both a composer and a performer – she is a cellist who performs as such in the award-winning TV series, Mozart in the Jungle, writes with authenticity and careful attention to detail.  I have invariably found her pieces to have a lot of integrity and emotional focus.  She writes, “The process of torsion essentially means twisting or spiraling.  All organic and inorganic objects have their own signature torsion fields, and by shaking physical objects, by vibrating them, by altering them, they are made to generate measurable torsion waves, static as well as dynamic….”  In her composition, she “attempts to translate this into the musical realm, unfolding in a single movement with expressive, colorful turns of event.  My lyrical/harmonic landscape (or ‘torsion field,’ if you will) is basically a linear chromatic progression that fuels the music of this composition.”  Ms. Mauer’s writing is sophisticated, intelligent, direct and beautiful.

The World Premiere of Hubert Howe’s Inharmonic Fantasy No. 4, with video by Sylvia Pengilly, was a stunning piece of electronic music.  Dr. Howe, who was the director of the Aaron Copland Conservatory of Music at C.U.N.Y. at Queens College, is one of the more creative experimenters in electronica.  He has a very broad knowledge base of compositional techniques and he likes to explore the potentials of new sounds.  The video was very well-crafted, sophisticated and enjoyable. I liked this piece a lot, too.

Ross Griffey’s Tied by a chance bond together, with Gregor Kitzis, violin and Christopher Oldfather, piano, was the winning piece of the 2015 New York Composers Circle Competition, and it’s a reasonably well-crafted piece that kept my attention focused. He has studied with both Samuel Adler and Robert Beaser at Julliard and he has solid writing chops.

The final piece on the program was by the late Brian Fennelly, the former New York University professor, who lived upstate in Kingston, and who wrote very sophisticated and intricate modernist pieces that were brilliant and intense –  sometimes, thorny.  His Sacred Songs for Ricardo Rivera, baritone, and Joshua Groffman, piano, were set on poetry by George Herbert (1593-1633), three intense religious poems, Love (I), The Temper, and Love (II).  Fenelly’s writing, with its complex modernism, nevertheless, did an excellent job supporting the vocal line of the singer, which was very articulate and commanding.  It’s a lovely piece, and I’m very glad to have heard it – I miss Brian Fennelly, who was very supportive of composers and performers, charming and kind, as well as brilliant.