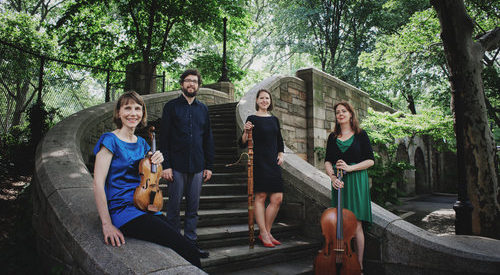 This review originally appeared in Self-Absorbed Boomer – https://selfabsorbedboomer.blogspot.com/. Reprinted with their kind permission. 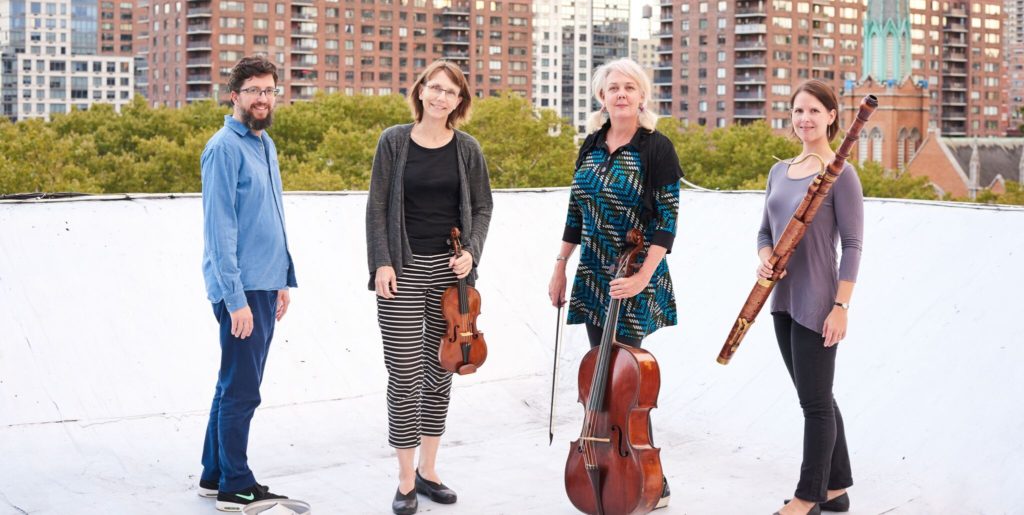 Some wag — probably a frustrated clarinet or English horn player — once defined the oboe as “an ill wind that nobody blows good.” That gag was put to rest at the Repast Baroque Ensemble’s “Dresden Fireworks” concert at First Unitarian Church in Brooklyn Heights on Friday, March 2, which featured guest oboist Geoffrey Burgess. Mr. Burgess ably demonstrated his mastery of the instrument, as well as its range and versatility. Repast’s regular crew –Amelia Roosevelt on violin, Stephanie Corwin on bassoon, Katie Reitman on cello, and Gabe Shuford on harpsichord — were also on top of their game.

As the title suggests, the playlist was of works by composers who were active at the Dresden court of the electors of Saxony and Polish kings during the baroque era — the early 18th century — with one exception. That was Vivaldi, who never visited Dresden, but whose music was greatly admired there. The others were: Johann Friederich Fasch; Francesco Maria Veracini (whose stormy engagement in Dresden ended with his self-defenestration from a third story window, fracturing a leg and hip); Wilhelm Friedemann Bach, eldest son of Johann Sebastian Bach; and Jan Dismas Zelenka.

The first piece on the program, Fasch’s Sonata in F Major for Violin, Oboe, Bassoon, and Continuo, begins with the bassoon playing solo, then joined by the oboe, violin and continuo (cello and harpsichord) in a lush, romantic series of variations. The second movement features lively interplay among the bassoon, oboe, and violin. The third is contemplative, with the oboe dominant, and the final movement is sprightly.

The Vivaldi Sonata in C Minor for Oboe and Continuo begins with a mournful slow march, begun by the bassoon, then joined by the oboe. By contrast, the second movement is upbeat, with the oboe leading from the start. The third is restful, but gave Mr. Burgess the opportunity to demonstrate the oboe’s range, and the frenetic fourth movement allowed him to show his virtuosity to the fullest.

Ms. Roosevelt described Francesco Maria Veracini as “certifiably crazy.” The first movement of his Sonata in E Minor for Violin and Continuo begins at a loping pace, then picks up to a fast canter, then back to a slower lope. The second is dreamlike, with Ms. Roosevelt’s violin carrying the mood superbly. Her violin is decisive in the third, and final, movement, which is stormy, perhaps reflecting the composer’s inner turmoil.

Fasch’s Sonata in C Major for bassoon and continuo gave Ms. Corwin and her instrument an opportunity to be in the foreground. The first movement is mellow, a quality associated with the bassoon, but the second is bouncy, allowing Ms. Corwin to demonstrate the instrument’s range. The third is reflective, with the lower range dominant. The fourth is playful and rapid, showcasing Ms. Corwin’s dexterity.

Just as Ms. Corwin got her star turn thanks to Fasch, Mr. Shuford got his with WF Bach’s Fantasia in A Minor for Harpsichord. Each note seemed to race from the keyboard to the string to the sounding board in an effort to beat the one before it. A bravura performance.

Before this concert, I was ignorant of the works of the Czech composer Jan Dismas Zelenka. His Trio in B-flat Major No. 3, for Oboe, Violin, Bassoon, and Continuo convinced me that I need to hear more. The first movement is languid, with the instruments seeming to perform a slow dance. In the second, the bassoon picks up the pace, followed by lively interplay between oboe and violin. The third is pensive, giving Mr. Burgess another chance to show the oboe’s range. The last movement starts with a duet between violin and bassoon, then the oboe joins in a rollicking finale that had me wanting to dance in the aisle.

Throughout, Ms. Reitman’s cello, along with Mr. Shuford’s harpsichord, provided a strong and reassuring sonic base over which the other musicians performed. 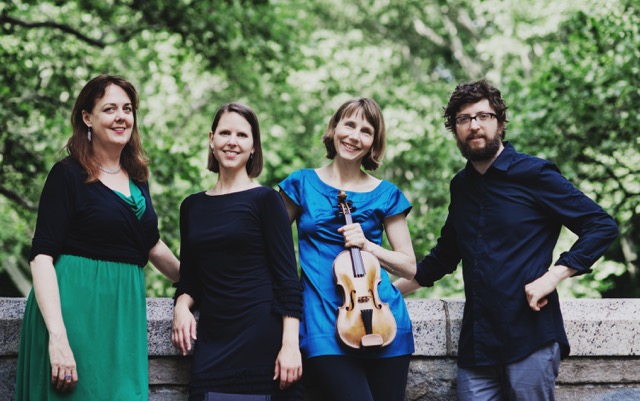 Repast’s next concert is titled “Bohemian Fantasy” and will include compositions by Biber, Schmelzer, Purcell, and an original work by Repast. It will feature guest violist Jessica Troy. Performances will be at 8:00 PM on Friday, May 4 at the McKinney Chapel, First Unitarian Church, 119 Pierrepont Street, Brooklyn, and at 8:00 PM on Saturday, May 5 at Advent Lutheran Church, 2504 Broadway (at 93rd Street), in Manhattan.

From Kernel to Concert, Part I by Barbara Oldham, Quintet of the Americas »
« Parthenia Viol Consort’s Tomb Sonnets – A Concert with Special Guest Vocalist Ryland Angel, on March 25 at The Secret Theater in Long Island City, Queens – A Review by Nancy Tooney