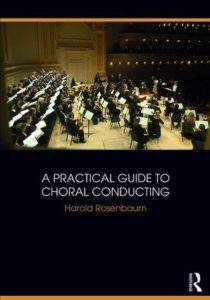 Harold Rosenbaum’s book, A Practical Guide to Choral Conducting, will be released in late October, 2017 by Routledge.The following is an excerpt from the book, discussing Anton Webern’s Entflieht auf leichten känen and Mozart’s Kyrie from Mass in C Minor:

This delicate double canon gem is as fleeting as the imagery in the text itself. Although it begins and ends in G Major, Webern was beginning to find his way in the realm of atonality with this piece. His detailed instructions, subtle as they are, are omnipresent and must be adhered to in order to achieve maximum effect and impact.

Since there are many simultaneous opposite effects occurring in this short piece, chiefly crescendos and decrescendos, the conductor is faced with constant dilemmas as to which section of the choir to focus on. There is no set answer to this.

Ms. 2 and 3: The elusive and vague nature of the piece seem to dictate only the slightest increase in volume during the marked crescendos, contrasted with those which have much more elevated dynamic marks printed in the score, as in ms. 7 (soprano and alto) and m. 14 (soprano).

Ms. 12 and 13: “hervortretend” means prominent or in the foreground. In m. 12 this can clearly be achieved in the women’s parts, marked “p” with a crescendo sign, since the men are singing generally softer. However, in m. 13, with the men having the same markings the women did a measure earlier, this prominence is more difficult to achieve because of what is happening above.  Let us agree that it is the concept to which we must remain true, and within each of the men’s lines the motif which became prominent a measure earlier will do so here too.

M 18: Although the opening music returns here, do not be tempted to perform it with the same dynamics. It should be softer and should remain quite faint until it disappears at the end.

When one thinks of Mozart’s music, two words come immediately to mind which have been used by countless musicologists and authors to describe it: “stately” and “elegant.” In thesauruses, “stateliness” is equated with dignity, majesty, splendor, formality and magnificence, and “elegant” with classy, refined, tasteful and graceful.

The Kyrie of the Mass in C Minor is the true embodiment of stateliness and elegance.  One can attempt to define these further in musical terms, or explain why it is so. But one would only fall short, just as truly understanding Mozart’s genius would be futile.  Suffice it to say that never has a triad (each of the 42 notes in the opening choral outburst is within the C minor chord), even in Beethoven’s extensive use of them in his symphonic themes, had such purity or been imbued with more eruptive, electrifying energy than this. It is one of the, if not the purest and most unencumbered yearnings for peace in the literature.

There are two equally important themes which are presented, tossed from one performer to another, and juxtaposed repeatedly throughout the first 32 measures of this movement, which appears to be bursting at the seams with inventiveness.  As is common in the scores of past composers, dynamic indications are often sparse and/or implied.  Thus in m. 6, the opening statement of the choir, the brass, which doubles it, is marked “f,” while the choir has no marking at all. Since one can only assume that the singers should burst forth in an outright manner, there now comes a bit of a problem with balance since the entire orchestra is “f” and the sopranos alone are singing.  At this point (m. 9) one has to revisit and perhaps modify Mozart’s intentions by reigning in the players. If that is the case, the theme presented by the instruments alone in m. 1 which is repeated in m. 9 remains subdued and in a supporting role to the choir, which should always be in the forefront when combined with instruments.  Too often in performances this is simply not the case.

More about A Practical Guide to Choral Conducting, including pre-order information, at https://www.routledge.com/A-Practical-Guide-to-Choral-Conducting/Rosenbaum/p/book/9781138058446. Visit Harold at http://www.haroldrosenbaum.com/.