All score reductions by the author. Read an analysis of the Symphony’s first movement at http://www.soundwordsight.com/2019/07/james-p-johnson-harlem-symphony-1932-first-movement-penn-station-subway-ride-an-analysis-by-kyle-gann/. 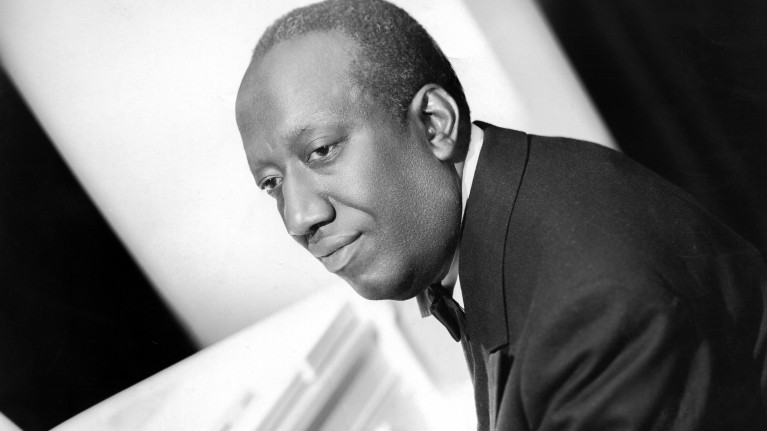 Johnson’s second movement is titled Song of Harlem in the manuscript, though on the recording it is called “April in Harlem” – probably a sly reference to the popular Vernon Duke song “April in Paris” that appeared the same year as the symphony. This is in a type of slow-movement form common in the 18th-century called sonata without development, meaning that the second theme of the exposition is transposed to the tonic in the recapitulation, though the two sections are not separated by a development section; Johnson clearly knew his classical repertoire.

There are two themes, between which the transitions comprise mostly short, sequential motives over standard modulatory progressions. The first theme is stated in the oboe at the outset, and returns in the strings at m. 60, both times in Bb. I give here not only the melody, in the middle staff (and the repeat of the first four measures is written out, sans repeat signs), but also the pizzicato string chords that accompany the first statement, plus Johnson’s chord symbols for the guitar part, which is not specifically notated (except for occasional melodic notes). One can see, then, along with the major and minor triads which tend to anchor the downbeats, Johnson’s use of whole-tone type chords, either augmented triads or tritone-plus-major third. The chord symbols suggest more notes in the guitar than are present in the strings – for instance, F7+5 for Eb-A-C#, and Bb9 for D-Ab-C. On the top staff are given the parallel major thirds in the flute which fill in each cadence. 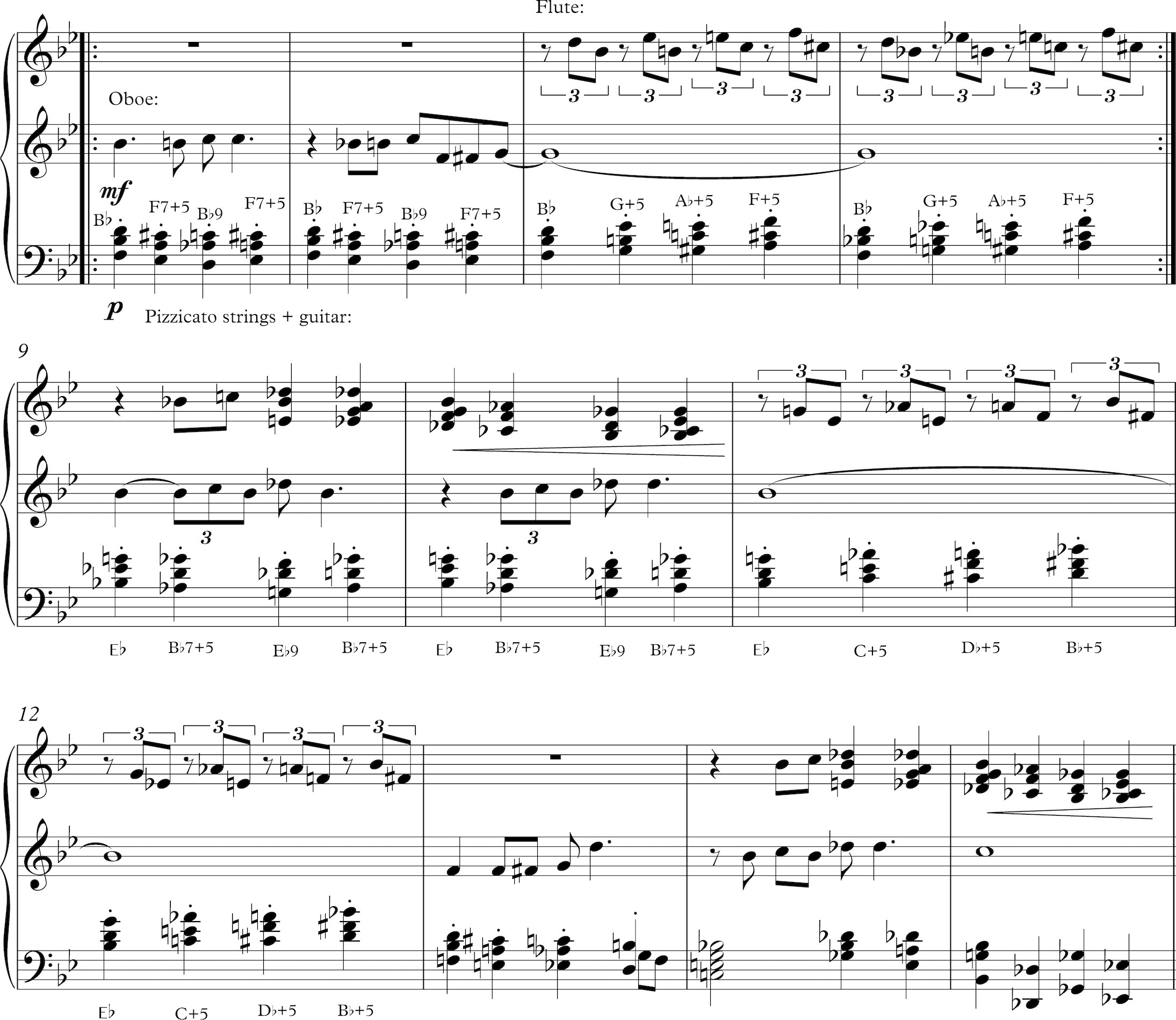 The appearance of the blues third Db in m. 10 creates an expectation, I think, that the melody will be a twelve-bar blues, but Johnson adds a fourth phrase that repeats the blues third and ends a little more ambiguously. The following transition is eight bars long, but Johnson elides the last measure of the sixteen-bard theme with the first measure of the transition for an odd-number count: a rather Mozartean touch.

The second theme is labeled in the score “Harlem Love Song.” It is an expansive thirty-two bars in length, alternating between winds and strings every eight bars. The style is grand Swing Era ballroom at its most cinematic, pausing on climaxes at sharped-fifth dominants and full of lush dominant major ninths. I provide here the guitar symbols notated by Johnson, but they don’t account for the lushness of certain chords. 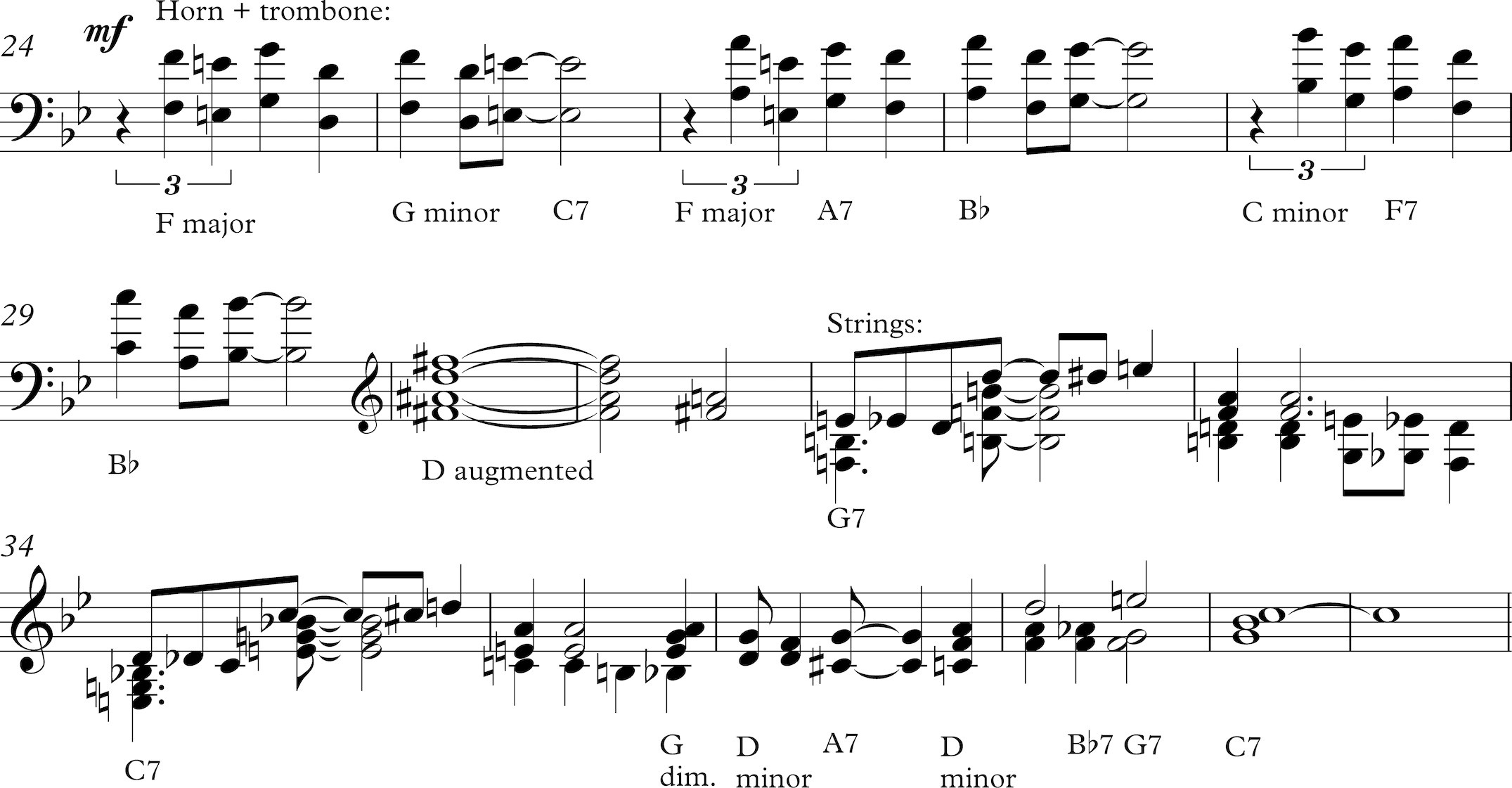 A perfunctory four-measure modulation returns us to the first theme, which, now in the strings, is a little more emphatically accompanied by much the same elements. The following transition starts out similar in rhythm to the analogous transition in the exposition, but two measures of chords stretch this passage out to nine measures (another odd-numbered macro-rhythm, and I can’t imagine Johnson wasn’t conscious of his balanced asymmetries). The last four measures of the transition seem poised to introduce a new tune, but instead merely return to the Harlem Love Song, now in the Bb tonic and more lushly orchestrated.

A four-measure coda threatens to end quietly at first, but ascends to a lush, Swing Era cadence with a sharped-fifth dominant and a trill figure dropping to the added sixth. One can imagine so many 1940s movies coming to a dramatic close with this phrase.