All score reductions by the author. Read an analysis of the Symphony’s second movement at http://www.soundwordsight.com/2019/08/james-p-johnson-harlem-symphony-1932-second-movement-song-of-harlem-april-in-harlem-an-analysis-by-kyle-gann/. 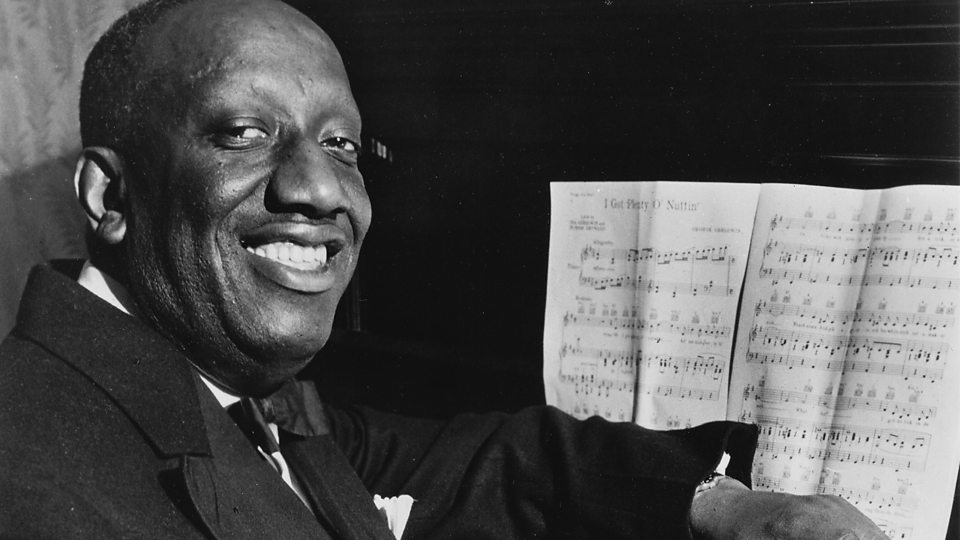 “Authenticity” is a word one bandies about at one’s risk these days, since abundant doubt has been cast on who is qualified to decide what is authentic in terms of whose music. Yet the Harlem Symphony of James P. Johnson (1894-1955) has long fascinated me as a jazzman’s contribution to the classical repertoire. Many, many composers, both white (Aaron Copland, George Gershwin, Leonard Bernstein) and black (William Grant Still, Florence Price, William Dawson) have written orchestral works that introduced jazz and blues idioms into European conventions. But the Harlem Symphony stands out as a jazz and blues piece, by one of the outstanding stride pianists at the peak of his career, that fits its materials into classical forms without much compromising their character. Johnson was trained in classical music, of course, since in his youth classical music was virtually the only kind in which tuition could be found. And he follows the classical formulas – but almost perfunctorily, simply making the requisite key changes, never distorting the style he’s most familiar with to put on classical airs. The result is a piece that fills out a classical architecture, but sounds honest, fun, unpretentious – and not divided in its allegiances.

My source for this analysis is the orchestral manuscript I found in the Jazz Institute Archive at Rutgers University. There are discrepancies between this score and the performance conducted by Marin Alsop on the Nimbus label, especially in the first movement. Arguably the score is improved by the changes made, but I don’t know who is responsible for them.

The first movement is titled “Penn Station” in the manuscript (though as “Subway Ride” on the recording), and has some descriptive titles marking certain sections to show what they are depicting. The first four pages Johnson evidently considered an introduction; they are labeled A through D, and the fifth page is marked as page 1. The piece opens with a grand, lumbering bass theme that will return at the end of the first movement.

Oddly, pages C and D (mm. 9-16) are omitted from the recording, and they do seem a little out of place. They are labeled “Train,” and are clearly meant to evoke the subway train beginning to take off, partly (mm. 13-14) with a steady beat on a drum with wire brushes.

The first theme might be taken to be that played by just the strings in the following example, with their motive of thirds and fourths moving by half-steps – specifically, chromatic appoggiaturas moving to the chord tones of the harmony. However, the added wind notes above do contribute to the melody, and are difficult to separate out.

Remarkably, the first violins’ melody employs ten of the twelve notes in the chromatic scale, despite the economy of notes and the simplicity of the harmony. The B section part of this theme is a horn solo accompanied by chords going around the circle of fifths, after which the first theme is repeated again, though this time with the flutes echoing similar eighth-note gestures. Oddly, the recording repeats both A and B sections, though the score does not call for it.

The transition from the first key area to the section is one of the briefest and most functional since the mid-eighteenth century. A clarinet plays two phrases (mm. 41-44), the first arpeggiating I-V-I in D, the second V-V7-V/IV in C, and then we’re in F major.

The derivation of the second theme from the first is impressively clever. Like the first theme, this one precedes almost every triad in the harmony with an appoggiatura chord a half-step lower, but the rhythm is sped up and irresistibly syncopated. The first theme’s initial motive is an eighth-note moving to the tonic: here it becomes a quarter-note moving to the dominant scale degree. Also, the scoring for a chorus of clarinets is taken from jazz orchestration – one can hardly imagine a classical composer announcing a new theme in parallel chords by three of the same instrument.

Like the main theme, this subordinate one also has a middle verse after which it returns:

And I particularly admire that in the repeat of the second theme, Johnson changes one note to approach the cadence from a different half-step.

The repeat of the theme is immediately followed by a colorful chord progression bringing the exposition to a close in F. Clarinets and strings in dotted rhythms open the development with an immediate move to Db, the rhythm intended to convey a pictorial effect that Johnson labels “Lady Shoppers – gossiping.”

One imagines the humor was better appreciated in 1932.

In mm. 75-85 a rhythmicized chord progression thick with tritones descending by half-step leads to a dominant pedal on A. The subordinate theme enters in the key of D now (mm. 86-93), poco piu mosso and with a countermelody soaring high above in the piccolo. Its final D chord becomes a dominant, and forthwith the first theme is stated in G (mm. 94-101), by the trumpets and trombones using cup mutes and the latter echoing the former. To end the development, the brass syncopate their way through a simple chord progression (Bb7-Eb, B7-E, C7-F, F7, mm. 102-111), pausing at the end for a wry figure in the trombones clearly labeled “Bus Horn.”

The opening of the recapitulation is labeled “7th Ave Promenade.” The first theme is played in Bb by the tutti orchestra (mm. 112-119). A tumultuous transition of syncopated dominant chords descending by half-steps, and marked Presto, acts as transition to the subordinate theme, now played in Bb and also tutti, the tempo marked “a tempo” and “slower” (mm. 130-140). A staccato piccolo line rings out above the orchestra. (Neither theme includes its middle section nor is repeated in the recap.) An expectant series of augmented triads then rises by half-step, and the opening introductory theme returns “grandioso” in the trombones to close the movement.