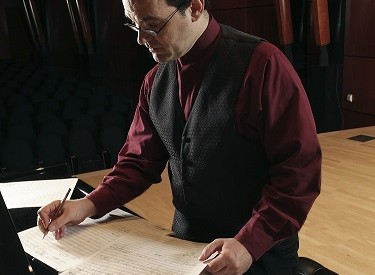 In 1998, I began working on a long-term project, a set of six string quartets exploring traditional forms through a contemporary lens.  Next Friday, the Carpe Diem String Quartet will premiere the final installment, String Quartet No. 6: Rapid Eye at the McConnell Arts Center in Worthington, Ohio.

Here is a program note:

String Quartet No. 6: Rapid Eye is a rumination on the musical, literary and cognitive meanings of fantasy.

The first movement – Adrift – is a fantasy on the supernatural journeys of   literature, the meandering of dreams, and the intuitive shifts of musical improvisation.   It begins with a flickering gesture — the “rapid eye” of the title — announcing the onset of dreams.  The flickering subsides into a trembling figure passed around the ensemble.  From this figure, a widely discursive, episodic movement ensues, as if the figure has become a voyager passing through a series of magical seas.

The second movement – Ashore – starts from the same flickering gesture, but takes it in a completely different direction.  Now we are in a familiar, C Major realm, but time – in a pizzicato pulse — is warped and twisted into irregular shapes, like the inadvertent distortions of memory.

In life, when we encounter a fork in the road, we must choose one direction, and we can only wonder what might have happened if we had chosen another.  In art, we are allowed to experience alternatives.  In this sense, art fulfills a very powerful human fantasy.

Can’t wait to find out which way Carpe Diem is going to do it.  Unfortunately, I have to miss both performances, which is pretty heartbreaking, since I’ve been working toward this moment for 16 years.

Maybe I’ll just fantasize about being able to be there.