A Loveletter to John Latouche

Gore Vidal called him “probably the best lyricist in the history of the American musical.” There’s certainly plenty of evidence to that effect in Howard Pollack’s 565-page Ballad of John Latouche (Oxford, 2017, 565 pp.).  But was he?  “I couldn’t begin to say,” writes the biographer in an email to me, with typical modesty. There are some similarities here to Marc Blitzstein (1905-1964), whom I also never met, though after I started completing his works, on Elie Siegmeister’s suggestion, Leonard Bernstein called me “Marc’s dybbuk.”  Modern Music editor Minna Lederman compared Latouche to Blitzstein, saying that both had “a one-of-a-kind talent” (p. 304). Blitzstein of course was a brilliant composer/pianist and a gifted librettist and translator as well, especially of Brecht, which Latouche only tried his hand at, and was later claimed to have “offered some counsel” to Blitzstein in his masterful Threepenny Opera translation.  That claim (p. 166) seems to have been made by Kenward Elmslie, Latouche’s companion toward the end of his life and the librettist for Jack Beeson’s opera Lizzie Borden, which may be the second-greatest American opera ever written, after The Ballad of Baby Doe, far and away Douglas Moore’s best opera, thanks to its John Latouche libretto.  I wish I could query Elmslie on this, but am told that the 90-year-old writer is alas suffering from severe dementia.

Both Baby Doe and Lizzie had a direct influence on my first original opera, Karla, completed at Cornell in 1974 (http://ljlehrman.artists-in-residence.com/Karla.html).  My quasi-waltz at the dinner party is a direct descendant of Beeson’s similar party music; and the retrieval of the dropped note just before the climactic Sextet, “Excuse me, Dr. Harris, but did you drop this?” winks at Samantha’s “Excuse me, Mrs. Tabor.  You dropped this card” in Moore’s Act I Scene 3.

More recently, the last three pitches sung by Baby Doe, on the words “ever young,” are directly reflected in the final scene of my most-performed work, E.G: A Musical Portrait of Emma Goldman as Emma implores America to “Take me back.” (http://ljlehrman.artists-in-residence.com/EG.html)

Baby Doe was also the last work I heard performed by my conducting teacher at Indiana University, Tibor Kozma, early in 1976.  My friend, composer/director and Hindemith-Goldovsky disciple Harold Blumenfeld, was there, despite his having earlier panned the opera as a “Gesamtkitschwerk,” culminating in what he sarcastically called “the Leadville Liebestod,” refusing to take it seriously.  (That appellation has apparently been invoked in earnest by writers such as David McKee in the Jan. 1997 Opera News.  Pollack takes at face value McKee’s claim that because Baby Doe’s final aria is in the same key as the end of Wagner’s Tristan und Isolde, B major, that a reversion to B minor on the word “love” constitutes quoting “the Tristan chord.”  But in fact that’s not true at all.  If you want to hear said chord quoted for real, listen to Debussy’s “Golliwog’s Cakewalk,” or Eisler’s “Song of the Madam” in The Roundheads and the Pointedheads (https://youtu.be/LC6BbYBWUGw) (at 36:15),  or my own “Ev’ry Boy Should Have A Jewish Mother” (https://youtu.be/OsTqlWlPCnA) in the third verse, about Freud.)

Kozma, however, took the opera’s subject of guilt and infidelity very seriously, and to heart, especially after his wife caught him in flagrante with one of the two sopranos cast as Baby Doe, and then died of cancer shortly thereafter.  During spring break, he was killed in a head-on car crash, driving, drunk, on the wrong side of the road. 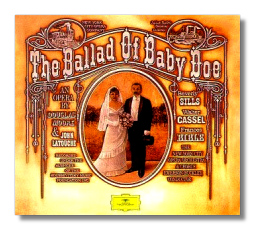 That last aria of Baby Doe’s was probably the most moving singing Beverly Sills ever did  – just listen to it on YouTube at https://www.youtube.com/watch?v=SKxL5TZW6HY.  No one has surpassed her in that, though Elizabeth Futral came close, at NY City Opera a few years ago.

Latouche’s position  in the history of the American musical stage would have been clinched, had he written nothing else but The Ballad of Baby Doe.  But he also wrote the classic Ballad for Americans with Earl Robinson (made famous by Paul Robeson);  Beggar’s Holiday (after John Gay’s ballad opera, The Beggar’s Opera) with Duke Ellington & Billy Strayhorn;  Ballet Ballads and The Golden Apple with Jerome Moross (whom I knew slightly, and whose music I had the pleasure of arranging, conducting and recording on the Premier CD Broadway Dreams, produced by his and my dear friend, the late Mike Snell); Cabin in the Sky with Vernon Duke, which includes one of the most infectious earworms ever written: “Taking a Chance on Love”–the title of a brilliant York Theatre production and CD based on Latouche’s “lyrics and life,” which also includes the partially Mozartian parodic tour de force “Nail in the Horseshoe,” written for Charlotte Rae with her husband John Strauss, “A Rainy Day” with Donald Fuller, and excerpts from The Vamp, with John Mundy, for Carol Channing; and portions of the original Candide, after Voltaire, with Leonard Bernstein and Lillian Hellman. In 1972, at Cornell, Bill Castleman and Risley College asked me to put together a production of that show, in a couple of weeks.  It was “not available,” as Hal Prince, Hugh Wheeler and Stephen Sondheim were rewriting it, but we did it anyway – “in concert,” much to the pleasure, later expressed to me, of Leonard Bernstein.  Pollack tries valiantly to figure out what Latouche wrote before he was fired and replaced by Richard Wilbur, and extensively summarizes the various roads the work has taken–though he missed the antecedence of the Bernstein-Lerner “Lonely Men of Harvard” (given to me by Thomas Sokol at Cornell, and confirmed by Bernstein himself in person, Jan. 17, 1974) in conjunction with the Sondheim-invented “Sheep’s Song” – see https://www.youtube.com/watch?v=v48c34xe4v0), probably because it does not appear in Michael H. Hutchins’ online http://www.sondheimguide.com/Candide; and he lets us know what Lillian Hellman wrote in 1982 about the sexier, less political version put together without her: “I was… horrified… to see that piece of shit… It was as if Mr. Prince had taken out his penis and waved it at a gaggle of fags….” Its apparent success with audiences did “not impress me. Diet books have been successful and so has Herman Wouk.” (p. 405) These remarks are, of course, of a piece with her scolding Bernstein to go back to his wife and stop fooling around with the young men following him (which he eventually did). “I must say,” I wrote Pollack, “I liked her original a lot better, too, Sondheim’s cleverness notwithstanding.’  (His one-word reaction: “Agree”(!)) 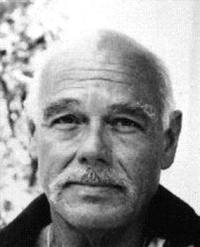 Working with the nicotine-, cocaine-, alcohol-, and (mostly homo) sex-addicted Latouche must have been quite an experience. The closest I think I ever got to what the heady atmosphere could have been like was having a home-cooked bouillabaisse dinner in 1983 with one of his erstwhile collaborators, the songwriter-turned-novelist Coleman Dowell, in the company of my first wife Karen, Jack & Nora Beeson, the actress Dorothy Loudon, and Cole’s life partner, Bertram Slaff. Latouche was from Virginia, Dowell from Kentucky.  Both had brought to New York a certain southern decadence, a self-doubting bordering on self-hatred, and a charming, though piercing, punning gourmet wit.  Bert, a kind, gentle, loving psychiatrist, had in 1939-42 been my father’s Harvard college roommate, who, Dad remembers, “got all the girls” he wanted to date, at least every month or so, but in 1954 had “fallen in love,” as Bert himself told me, with Cole.  Two years after that amazing dinner in their 15th floor apartment on the east side, Cole jumped from a window, leaving Bert as his executor.  I have the scores of songs he wrote with Latouche and Carl Van Vechten, and would still love to perform and record them some time.

Other Latouchian loose ends that would seem well worth exploring are a story outline he wrote for Lilith, or the Deadliest Sin; songs he wrote with Rudi Revil, whose “Le petit cordonnier” I’ve loved since hearing it on a (Russian!) record in the 1960s; lyrics he set to some of Chopin’s best-known piano pieces for the Song of Norway-type musical Polonaise, based on the life of the Polish patriot Tadeusz Kosciuszko; collaborations with composers David Fuller and David Broekman, whom I confess I’d never heard of before, but whose works sound interesting; and a musical he wrote with Ernesto Lecuona called Tamborito, the score for which seems to be viewable (Pollack wrote me) only in a library in Havana.  Hmm.  The only viewable video of Marc Blitzstein’s No for an Answer is in San Francisco – and Pollack did go there to see it!  So why don’t we all make a research trip to Havana!?:>)

LEONARD LEHRMAN’s 12th opera, “A Loveletter from Rosa Luxemburg,” reviewed here by Mark Zuckerman Feb. 14, 2019 (see http://www.soundwordsight.com/2019/02/works-of-social-consciousness-a-concert-review-by-mark-zuckerman), may be viewed at https://youtu.be/ejtRe2zxcpo.  Helene Williams sings 4 of his songs in 5 languages at the Musicians’ Club of NY concert March 24, 2019 at Scandinavia House in Manhattan.  And his works will be featured Roslyn May 2 at Temple Beth Sholom; May 5, June 23 & Aug. 18 at Trinity Episcopal Church, where he is Artist-in-Residence. His website is http://www.ljlehrman.artists-in-residence.com.